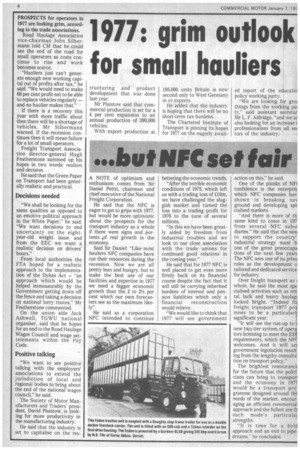 Page 6, 7th January 1977 — 1977: grim outlook
Close
Noticed an error?
If you've noticed an error in this article please click here to report it so we can fix it.
Keywords : Road Haulage Association, Haulage, Business / Finance

PROSPECTS for operators in 1977 are looking grim, according to the trade associations.

Road Haulage Association vice-chairman John Silbermann told CM that he could see the end of the road for small operators as costs continue to rise and work becomes scarce.

"Hauliers just can't generate enough new working capital out of profits after tax," he said. "We would need to make 60 per cent profit net to be able to replace vehicles regularly — and no haulier makes that."

If there is a recovery this year with more traffic about then there will be a shortage of vehicles, Mr Silbermann warned. If the recession continues then it will mean failure for a lot of small operators.

He said that the Green Paper on Transport had been generally realistic and practical.

"We shall be looking for the same qualities as opposed to an emotive political approach in the White Paper," he said. "We want decisions to end uncertainty on the eightyear-old weight issue and from the EEC we want a realistic decision on drivers' hours."

From local authorities the FTA hoped for a realistic approach to the implementation of the Dykes Act — "an approach which would be helped immeasurably by the Government getting down off the fence and taking a decision on national lorry routes," Mr Featherstone commented.

On the union side Jack Ashwell, TGWU national organiser, said that he hopes for an end to the Road Haulage Wages Council and wage settelements within the Pay Code.

"We want to see positive* talking with the employers' associations to extend the jurisdiction of local and regional bodies to bring about the end of the national wages council," he said.

• The Society of Motor Manufacturers and Traders' president, David Plaistow, is looking for more productivity in the manufacturing industry. He said that the industry is set to capitalise on the res tructuring and product development that was done last year.

Mr Plaistow said that commercial production is set for a 4 per cent expansion to an annual production of 390,000 vehicles.

With export production at 195,000 units Britain is now second only to West Germany in cv exports.

He added. that the industry is hoping that there will be no short-term tax burdens.

The Chartered Institute of Transport is pinning its hopes for 1977 on the eagerly await ed report of the educatio policy working party.

"We are looking for greE things from the working pal ty," said assistant secretar Mr L. F. Aldridge, "and we ar also looking for an increase i professionalism from all set tors of the industry.