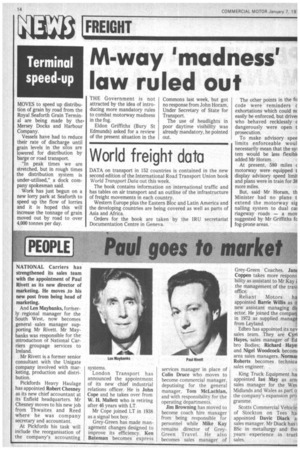 DATA on transport in 152 countries is contained in the new second edition of the International Road Transport Union book World Transport Data out this week.

The book contains information on international traffic and has tables on air transport and an outline of the infrastructure of freight movements in each country. Western Europe plus the Eastern Bloc and Latin America and the developing countries are being covered as well as parts of Asia and Africa.

Orders for the book are taken by the IRU secretariat Documentation Centre in Geneva. The other points in the fo code were reminders c exhortations which could nc easily be enforced, but drivel who behaved recklessly c dangerously were open t prosecution.

At present, 580 miles motorway were equipped t display advisory speed limit and plans were in train for 38 more miles.