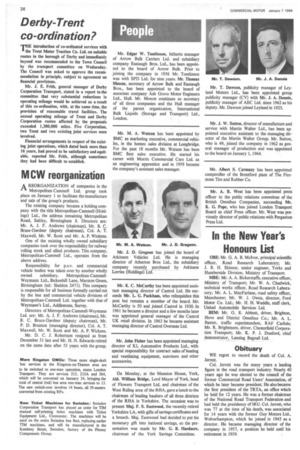 Page 38, 7th January 1966 — Derby-Trent co-ordination?
Close
Noticed an error?
If you've noticed an error in this article please click here to report it so we can fix it.
Keywords : Cities In England, Unitary Authorities Of England, Derby, Nottingham, Nottingham Corporation Tramways, Business / Finance

TIM introduction of co-ordinated services with 2the Trent Motor Traction Co. Ltd. on suitable routes in the borough of Derby and immediately beyond was recommended to the Town Council by the transport committee on Wednesday. The Council was asked to approve the recommendation in principle, subject to agreement on financial provisions.

Mr. J. E. Frith, general manager of Derby Corporation Transport, stated in a report to the committee that very substantial reductions in operating mileage would be achieved as a result of this co-ordination, with, at the same time, the provision of reasonable travel facilities. The annual operating mileage of Trent and Derby Corporation routes affected by the proposals exceeded 1,300,000 miles. Five Corporation, two Trent and two existing joint services were involved.

Financial arrangements in respect of the existing joint operations, which dated back more than 16 years, had proved to be satisfactory and equitable, reported Mr. Frith, although sometimes they had been difficult to establish.