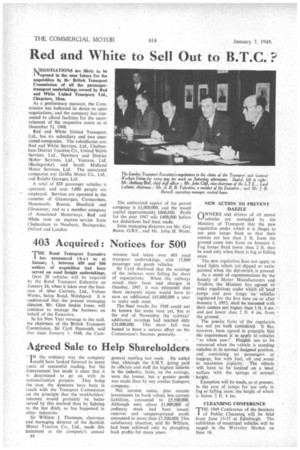 Page 30, 7th January 1949 — Red and White to Sell Out to B.T.C. ?
Close
Noticed an error?
If you've noticed an error in this article please click here to report it so we can fix it.
Keywords : Basingstoke, Basingstoke And Deane, Associated Motorways, Newbury, Red & White Services, England

NEGOTIATIONS are likely to be opened in the near future for the acquisition by fir. British Transport Commission of all the passengertransport undertakings owned by Red and White United Transport, Ltd., Chepstow, Mon.

As a preliminary measure, the Cornmission has indicated its desire to open negotiations, and the company has consented to afford facilities for the ascertainment of the respective assets as at December 31, 1948.

A total of 820 passenger vehicles is operated, and over 3.000 . people are employed. Services are operated in the counties of Glamorgan, Carmarthen. Monmouth, Brecon, Hereford and Gloucester, and as a member company of Associated Motorways, Red and White runs an express service from Cheltenham to Newbury. Basingstoke, Oxford and London The authorized capital of the parent company is £1,000,000. and the issued capital approximately £860,000. Profit for the year 1947 wis £400,000 before tax deductions had been made.