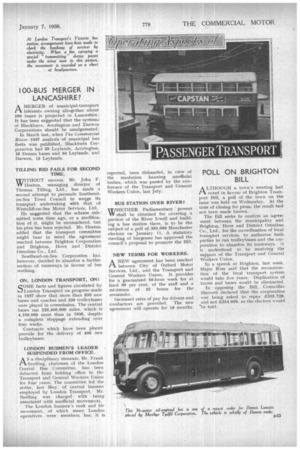 Page 29, 7th January 1938 — 100-BUS MERGER IN LANCASHIRE?
Close
Noticed an error?
If you've noticed an error in this article please click here to report it so we can fix it.
Keywords :

AMERGER of municipal-transport interests owning altogether about 100 buses is projected in Lancashire. It has been suggested that the systems of Blackburn, Accrington and Darwen Corporations should be amalgamated.

In March last, when The Commercial Motor. 1937. analysis of municipal bus fleets was published, Blackburn Corporation had 39 Leylands, Accrington, 16 Dennis buses and 34 Leylands, and Darwen, 13 Leylands.

WITHOUT success, Mr. John F. Heaton, managing director of Thomas Tilling, Ltd., has made a second attempt to persuade Southendon-Sea Town Council to mem its transport undertaking with that of Westcliff-on-Sea Motor Services, Ltd.

He suggested that the scheme submitted some time ago, or a modification of it, Might be reconsidered, but his plan has been rejected. Mr. Heaton added that the transport committee might bear in mind the agreement reached between Brighton Corporation and Brighton, Hove and• District Omnibus Co., Ltd.

Southend-on-Sea Corporation ha.3, however, decided to abandon a further.. section of tramways in favour of bus working.

ON, LONDON TRANSPORT, ON!

QOME facts and figures circulated by

Contracts which have been placed provide for the delivery of 400 new trolleybuses.

AS a disciplinary measure, Mr. Frank Snelling, chairman of the London Central Bus Committee, has been debarred from holding office in the Transport and General Workers Union for four years. The committee led the strike, last May, of central busmen employed by London Transport. Mr. Snelling was charged with being associated with unofficial movements. The London busmen's rank and file movement, of which many London operatives were members, has, it is

reported, been disbanded, in view of the resolution banning unofficial bodies, which was passed by the conference of the Transport and General Workers Union, last July.

WHETHER Parliamentary powers V V -shall be obtained for covering a portion of the River Irwell and building a bus station there, is to be the subject of a poll of 350,000 Manchester electors on January 11. A statutory meeting of burgesses has approved the council's proposal to promote the Bill.

ANEW agreement has been reached between City of Oxford Motor Services, Ltd., and the Transport and General Workers Union. It provides for a guaranteed 50-hour week for at least 90 per cent, of the staff and a minimum of 32 hours for the remainder.

Increased rates of pay for drivers and conductors are provided. The new agreement will operate for 18 months.

ALTHOUGH a town's meeting had voted in favour of Brighton Transport Bill, a poll of the town on the issue was held on Wednesday. At the time of closing for press, the result had not been made known.

The Bill seeks to confirm an agreement between the municipality and Brighton. Hove and District Omnibus Co., Ltd., for the co-ordination of local transport services, to authorize both parties to run trolleybuses and the corporation to abandon its tramways. t is understood to he receiving the support of the Transport and General Workers Union,

In a speech at Brighton, last week, Major Ross said that the reconstruction of the local transport system, would -take five years. Duplication of trams and buses would be eliminated.

In opposing the Bill, Councillor Sherrott declared that the corporation was being asked to repay£505,728, and not £354.000, as the electors would be told.