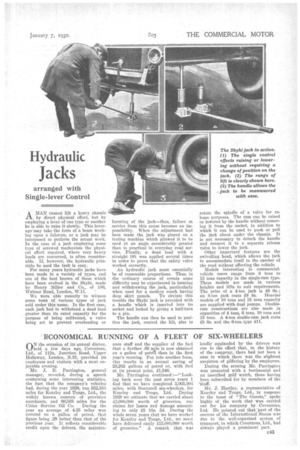 Page 65, 7th January 1930 — Hydraulic
Close
Noticed an error?
If you've noticed an error in this article please click here to report it so we can fix it.

AMAN cannot lift a heavy chassis by direct physical effort, but by employing a lever of one type or another he is able to raise it slowly. This leverage may take the form of a beam working upon a fulcrum, or a jack may be interposed to perform the actual work. In the case of a jack employing some type of screwed mechanism the physical effort required, where very heavy loads are concerned, is often considerable. If, however, the hydraulic principle be used the task is easy.

For many years hydraulic jacks have been made in a variety of types, and one of the best known of those which have been evolved is the Skyhi, made by Henry Miller and Co., of 186, Weimer Road, London, W.11.

We were able recently to witness some tests of various types of jack sold under this name. In the first case, each jack had to withstand a dead load greater than its rated capacity for the purpose of being calibrated, a valve being set to prevent overloading or

burstinm' of the jack—thus, failure in service from this cause becomes an impossibility. When the adjustment had been made the jack was placed on a testing machine which allowed it to be used at an angle considerably greater than is practical in everyday road service. Finally, a dead load with a straight lift was applied several times in order to prove that the safety valve worked correctly.

An hydraulic jack must essentially be of reasonable proportions. Thus, in the ordinary course of events some difficulty may be experienced in locating and withdrawing the jack, particularly when used for a modern coach having deep skirt panels. To obviate this trouble the Skyhi jack is provided with a handle which is inserted into its socket and locked by giving a half-turn to a pin.

The handle can then be used to position the jack, control the lift, also to rotate the spindle of a valve for release purposes. The ram can be raised or lowered by the handle without removing it from the socket, in addition to ,which it can be used to push or pull the jack about under the chassis. It is not necessary to detach the handle and connect it to a separate release valve to lower the jack.

Other important features are the swivelling head, which allows the jack to accommodate itself to the camber of the road without affecting the vehicle.

Models interesting to commercialvehicle users range from 8 tons to 15 tons capacity in the single-ram type. These models are made in various heights and lifts to suit requirements. The price of a 4-ton jack is £6 6a.; an 8-ton jack costs £8 8s. Heavier models of 10 tons and 15 tons capacity are supplied with dual pumps. Doubleram constructions are also made in capacities of 4 tons, 6 tons, 10 tons and 15 tons. A 4-ton double-ram jack costs £8 8s. and the 0-ton type £13.