TROLLEYBUS BILLS TO BE OPPOSED 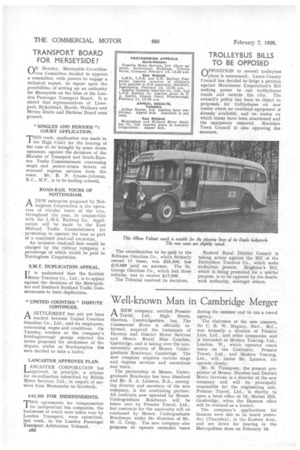 Page 118, 7th February 1936 — TROLLEYBUS BILLS TO BE OPPOSED
Close
Noticed an error?
If you've noticed an error in this article please click here to report it so we can fix it.

OPPOSITION to several trolleybus 1/4/plans is announced. Lanes County Council has decided to lodge a petition against Manchester Corporation's Bill seeking power to run trolleybuses inside and outside the city. The council's policy has been to object to proposals for trolleybuses on new routes where no overhead equipment is already. available, and on routes on which trams have been abandoned and the equipment removed. Rochdale Town Council is also opposing the measure.

Basford Rural District Council is taking action against the Bill of the Derbyshire Traction Co„ which seeks trolleybus powers. Brighton's Bill, which is being promoted for a similar purpose, is to be opposed by the Southwick authority, amongst others.