THE " BETTER ROADS" MOVEMENT IN INDIA. 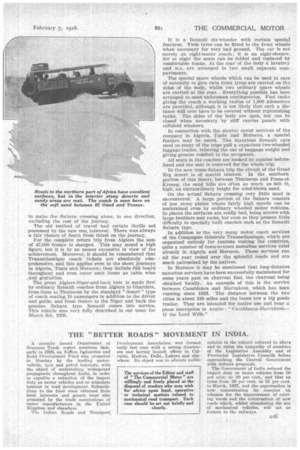 Page 119, 7th February 1928 — THE " BETTER ROADS" MOVEMENT IN INDIA.
Close
Noticed an error?
If you've noticed an error in this article please click here to report it so we can fix it.

A recently issued Department of Overseas Trade report mentions that, early in 1926, an Indian Lidustries and Road Development Fund was promoted in Bombay by the leading motorvehicle, tyre and petrol interests, with the object of undertaking widespread propaganda throughout India, in order to expedite a reduction of the import duty on motor vehicles and to stimulate interest in road development. Subscribdons to the fund were 'obtained from local interests and grants were also promised by the trade associations of motor manufacturers in the United Kingdom and elsewhere.

The Indian Roads and Transport

Development Association was formed early last year with a strong directorate and having branch offices in Calcutta, Madras, Delhi, Lahore and elsewhere. Its object was to educate public • opinion in the subject referred to above and to enlist the sympathy of members of the Legislative • Assembly and of Provincial Legislative Councils befOre approaching the Central Government with definite proposals,

The Government of India reduced the import duty on motor vehicles from 30 per cent. to 20 per cent., and that on tyres from 30 per cent. to 15 per cent. in March, 1927, and the organization is now concentrating its energies on schemes for the improvement of existing roads and the construction of new roads which, whilst stimulating the use of mechanical vehicles, will act as feeders to the railways.