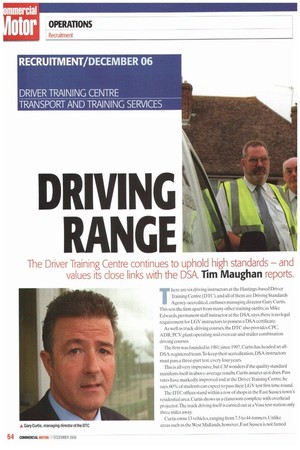 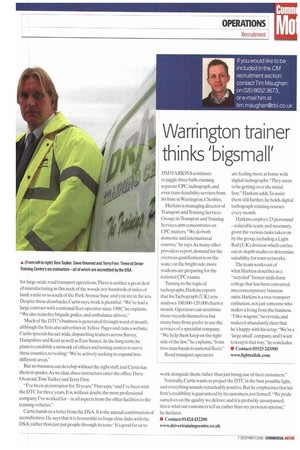 The Driver Training Centre continues to uphold high standards — and values its close links with the DSA. Tim Maughan reports.

There are six driving instructors at the Hastings-based Driver Training Centre (DTC), and all of them are Driving Standards Agency-accredited, enthuses managing director Gary Curtis. This sets the firm apart from many other training outfits: as Mike Edwards, permanent staff instructor at the DSA, says, there is no legal requirement for LGV instructors to possess a DSA certificate.

The firm was founded in 1981; since 1997. Curtis has headed an allDSA-registered team.To keep their accreditation, DSA instructors must pass a three-part test, every four years.

This is all very impressive, but CM wonders if the quality standard manifests itself in above-average results. Curtis assures us it does. Pass rates have markedly improved and at the Driverliaining Centre, he says. 60% of students can expect to pass their LGV test first time round.

The DTC offices stand within a row of shops in the East Sussex town's residential area. Curtis shows us a classroom complete with overhead projector.The truck driving itself is carried out at a Vosa test station only three miles away.

Curtis owns 13 vehicles, ranging from 7.5 to 421-tormers. Unlike areas such as the West Midlands, however, Fast Sussex is not famed for large-scale road transport operations.'There is neither a great deal of manufacturing in this neck of the woods, nor hundreds of miles of land: a mile or so south of the Park Avenue base, and you are in the sea. Despite these drawbacks, Curtis says, work is plentiful. "We've had a large contract with a national fleet operator since 1998," he explains. "We also train fire brigade, police, and ambulance drivers."

Much of the DTC's business is generated through word of mouth, although the firm also advertises in Yellow Pages and runs a website. Curtis spreads his net wide, dispatching trainers across Surrey, Hampshire and Kent as well as East Sussex. In the long term, he plans to establish a network of offices and testing centres to serve these counties, revealing:"We're actively seeking to expand into different areas."

But no business can develop without the right staff, and Curtis has them in spades.As we chat, three instructors enter the office: Dave Overend,Tom Tucker and Terry Finn.

"I've been an instructor for 20 years," Finn says."and I've been with the DTC for three years. It is, without doubt.the most professional company I've worked forin all aspects from the office facilities to the training vehicles.

Curtis hands us a letter from the DSA. It is the annual confirmation of accreditation. He says that it is favourable to forge close links with the DSA, rather than just put people through its tests: "It's good for us to work alongside them, rather than just being one of their customers."

Naturally, Curtis wants to project the DTC in the best possible light, and everything sounds remarkably positive. But he emphasises that his firm's credibility is guaranteed by its customers, not himself.-We pride ourselves on the quality we deliver,and it is probably unsurpassed; this is what our customers tell us, rather than my personal opinion." he declares.