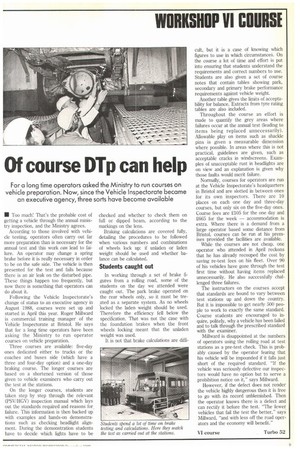 Page 121, 7th December 1989 — W course DTp can help
Close
Noticed an error?
If you've noticed an error in this article please click here to report it so we can fix it.
Keywords : Brakes, Parking Brake, Technology, Transport, Road Transport, Education

For a long time operators asked the Ministry to run courses on vehicle preparation. Now, since the Vehicle Inspectorate became an executive agency, three sorts have become available

• Too much! That's the probable cost of getting a vehicle through the annual ministry inspection, and the Ministry agrees.

According to those involved with vehicle testing, operators often carry out far more preparation than is necessary for the annual test and this work can lead to failure. An operator may change a spring brake before it is really necessary in order to be on the safe side. The vehicle is then presented for the test and fails because there is an air leak on the disturbed pipe. These things happen too frequently, but now there is something that operators can do about it.

Following the Vehicle Inspectorate's change of status to an executive agency in August 1988, courses were set up and started in April this year. Roger Millward is commercial training manager of the Vehicle Inspectorate at Bristol. He says that for a long time operators have been asking the Ministry to run operator courses on vehicle preparation.

Three courses are available: five-day ones dedicated either to trucks or the coaches and buses side (which have a three and four-day option) and a one-day braking course. The longer courses are based on a shortened version of those given to vehicle examiners who carry out the test at the stations.

On the longer courses, students are taken step by step through the relevant (PSV/HGV) inspection manual which lays out the standards required and reasons for. failure. This information is then backed up with examples and hands-on demonstrations such as checking headlight alignment. During the demonstration students have to decide which lights have to be

checked and whether to check them on full or dipped beam, according to the markings on the lens.

Braking calculations are covered fully, detailing the procedures to be followed when various numbers and combinations of wheels lock up: if unladen or laden weight should be used and whether balance can be calculated.

In working through a set of brake figures from a rolling road, some of the students on the day we attended were caught out. The park brake operated on the rear wheels only, so it must be treated as a separate system. As no wheels locked the laden weight should be used. Therefore the efficiency fell below the specification. That was not the case with the foundation brakes when the front wheels locking meant that the unladen weight was used.

It is not that brake calculations are diffi

cult, but it is a case of knowing which figures to use in which circumstances. On the course a lot of time and effort is put into ensuring that students understand the requirements and correct numbers to use. Students are also given a set of course notes that contain tables showing park, secondary and primary brake performance requirements against vehicle weight.

Another table gives the limits of acceptability for balance. Extracts from tyre rating tables are also included.

Throughout the course an effort is made to quantify the grey areas where failures occur at the annual test (leading to items being replaced unnecessarily). Allowable play on items such as shackle pins is given a measurable dimension where possible. In areas where this is not practical, guidelines are given, such as acceptable cracks in windscreens, Examples of unacceptable rust in headlights are on view and an explanation is given why those faults would merit failure.

Normally, courses for operators are run at the Vehicle Inspectorate's headquarters in Bristol and are slotted in between ones for its own inspectors. There are 10 places on each one day and three-day courses, but only six on the five-day ones. Course fees are 2105 for the one day and 2665 for the week — accommodation is extra. Where there is a demand from a large operator based some distance from Bristol, courses can be run at his premises provided the facilities are available.

While the courses are not cheap, one operator who attended in April reckons that he has already recouped the cost by saving re-test fees on his fleet. Over 90 of his vehicles have gone through the test first time without having items replaced unnecessarily. He also successfully challenged three failures.

The instructors on the courses accept that standards are bound to vary between test stations up and down the country. But it is impossible to get nearly 500 people to work to exactly the same standard. Course students are encouraged to inquire, politely, why a vehicle has been failed and to talk through the prescribed standard with the examiner.

Millward is disappointed at the numbers of operators using the rolling road at test stations as a pre-test check. This is probably caused by the operator fearing that his vehicle will be impounded if it falls just short of the required standard. "If the vehicle was seriously defective our inspectors would have no option but to serve a probibition notice on it," says Millward.

However, if the defect does not render the vehicle highly dangerous then it is free to go with its record unblemished. Then the operator knows there is a defect and can rectify it before the test. The fewer vehicles that fail the test the better," says Millward, "and with less off the road operators and the economy will benefit."