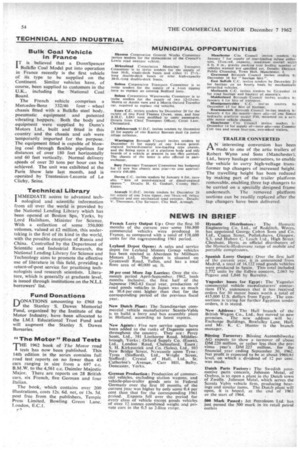 French Lorry Output Up: Over the first 10 months of the current year some 186.800 commercial vehicles were produced in France. as compared with a total of 178,600 units for the cqiresponding 1961 period.

Leyland Depot Opens: A sales and service depot for Leyland Motors Group vehicles has been opened in Aberdeen by Millburn Motors Ltd. The depot is situated on Greenwell Road, Tullos, and has a total floor area of 40.000 sq. ft.

30 per cent More dap Lorries: Over the sixmonth period April-September. 1962, both months inclusive, the first half of the Japanese 1962-63 fiscal year, production of road goods vehicles in Japan was as much as 30.4 per cent higher than that for the corresponding period of the previous fiscal year.

New Dutch Plant: The Scandinavian commercial vehicle manufacturer Scania-Vabis is to build a lorry and bus assembly plant in Holland. according to latest reports.

German Production: Production of commercial vehicles, excluding station wagons, and vehicle-plus-trailer goods sets in Federal Germany over the first 10 months of the current year was higher by only some 0.4 per cent than that for the corresponding 1961 period. Exports fell over the period for every class of vehicle except goods vehicles of over 12 tonnes combined weight and private cars in the 0.5 to 2-litre range.

Spanish Lorry Output: Over the first half of the current year, it is announced from Madrid, a total of 16,122 road goods vehicles were produced in Spain. This total included 2,772 units by the .Edbro concern. 2,063 by Pcgaso and 1,846 by Barreiro.

Yugoslav buses for Egypt: The Yugoslav commercial vehicle manufacturers' consortium ITV, announces that it has received orders for 50 motor buses worth a total of 415,000 U.S. dollars from Egypt. The consortium is trying for further Egyptian tender orders, it is stated.

New Address: The Hull branch of the British Wagon Co., Ltd., has moved to new premises. The new address will be ; Exchange Buildings, Bowlalley Lane, Hull, and Mr. K. C. Hunter is the branch manager.

Biissing Turnover: Bilssing Autombilwcrke AG expects to show a turnover of about DM 220 million, or rather less than the previous year's DM 227 million, for the financial year ending September 30, 1962. Net profit is expected to be at about 1960161 level, on which a dividend of 12 per cent. was made.

Dutch Parts Factory : The Swedish automotive parts concern. Johnson Metal, of Orebro, is to open a plant in the Dutch town of Zwolle. Johnson Metal, which serves the Scania Vabis vehicle firm, producing bearings and similar items. The Dutch plant will open, it is hoped, at the end of 1963 or the start of 1964, SOO Mark Passed: Jet Petroleum Ltd. has just passed the 500 mark in its retail petrol outlets