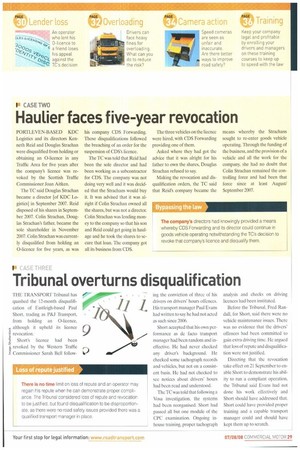 THE TRANSPORT Tribunal has quashed the 12-month disqualification of Eastleigh-based Paul Short, trading as P&J Transport, from holding an 0-licence, although it upheld its licence revocation.

5 Short's licence had been aj, revoked by the Western Traffic 3 Commissioner Sarah Bell follow ing the conviction of three of his drivers on drivers' hours offences. His transport manager Paul Evans had written to say he had not acted as such since 2006.

Short accepted that his own performance as de facto transport manager had been random and ineffective. He had never checked any driver's background. He checked some tachograph records and vehicles, but not on a consistent basis. He had not checked to see notices about drivers' hours had been read and understood.

The TC was told that following a Vosa investigation, the systems had been reorganised. Short had passed all but one module of the CPC examination. Ongoing inhouse training, proper tachograph analysis and checks on driving licences had been instituted.

Before the Tribunal, Fred Randall, for Short, said there were no vehicle maintenance issues. There was no evidence that the drivers' offences had been committed to gain extra driving time. He argued that loss of repute and disqualification were not justified.

Directing that the revocation take effect on 21 September to enable Short to demonstrate his ability to run a compliant operation, the Tribunal said Evans had not done his work effectively and Short should have addressed that. Short could have provided proper training and a capable transport manager could and should have kept them up to scratch.