What is Good Evidence ? 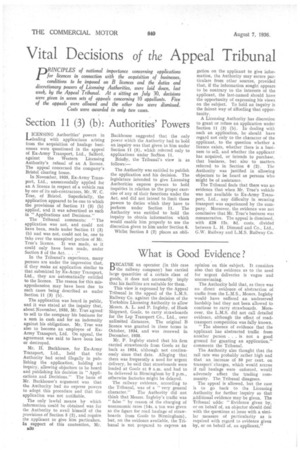 Page 40, 7th August 1936 — What is Good Evidence ?
Close
Noticed an error?
If you've noticed an error in this article please click here to report it so we can fix it.
Keywords : Goole, Tribunal, Law / Crime, Business / Finance

BECAUSE an operator (in this case the railway company) has carried large quantities of a certain class of goods, it does not necessarily imply that his facilities are suitable for them.

This view is expressed by the Appeal Tribunal in the appeal of the L.M.S. Railway Co. against the decision of the Yorkshire Licensing Authority to allow Messrs. A. L. and P. Ingleby, of Hook Shipyards Goole, to carry strawboards for the Lep Transport Co., Ltd., over unlimited distances, The original B licence was granted in these terms in October, 1934, and was renewed in December, 1935.

Mr. P. Ingleby stated that his firm carried strawboards from Goole as far back as 1924, although not continuously since that date. Alleging that there was frequently a need for urgent delivery, he said that strawboards were loaded at Goole at 9 a.m. and had to be delivered in Birmingham by 2 p.m., otherwise factories might be delayed.

The railway evidence, according to the Tribunal, was of a "very general character." The Authority did not think that Messrs. Ingleby's traffic was "false " by reason of the charging of uneconomic rates (14s. a ton was given as the figure for road haulage of strawboards from Goole to Birmingham), but, on the evidence available, the Tribunal is not prepared to express an opinion on this subject. It considers also that the evidence as to the need for urgent deliveries is vague and unconvincing.

The Authority held that, as there was no direct evidence of abstraction of traffic from the L.M.S., Messrs. Ingleby would. have suffered an undeserved hardship had they not been allowed to continue to carry strawboards. Moreover, the L.M.S. did not call detailed evidence, although the effect of roadtransport competition was fully known.

" The absence of evidence that the applicant has abstracted traffic from another person . . is not a good ground for granting an application," comments the Tribunal.

The Authority also thought that the rail rate was probably rather high and that an increase of 50 per cent. on transport charges, which would accrue if rail haulage were enforced, would adversely affect the trading community. The Tribunal disagrees.