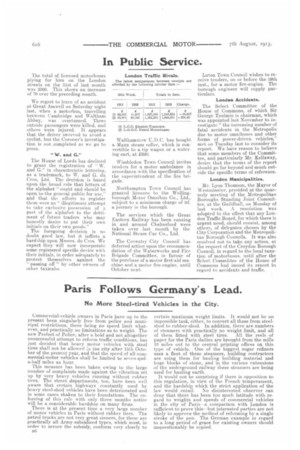 Page 4, 7th August 1913 — In Public Service.
Close
Noticed an error?
If you've noticed an error in this article please click here to report it so we can fix it.
Keywords : George Toulmin, Knights Bachelor, House Of Commons Of The United Kingdom, Local Education Authority

The total of licensed motorbuses plying for hire on the London streets on the 31st of last month was 3309. This shows an increase of 70 over the preceding month.

We regret to learn of an accident at Great Amwell on Saturday night last, when a motorbus, travelling between Cambridge and Waltham Abbey, was overturned. Three outside passengers were killed, and others were injured. It appears that the driver swerved to avoid a cyclist, but the Coroner's investigation is not completed as we go to press.

The House of Lords has declined to grant the registration of 'W. and G." in characteristic lettering, as a trademark, to W. and G. du Cros, Ltd. The decision is based upon the broad rule that letters of the alphabet "ought and should be open to the general public for use," and that the efforts to register them were an " illegitimate attempt to take exclusive possession of a part of the alphabet to the detriment of future traders who may honestly desire to put their own initials on their own goods." The foregoing decision is no doubt good law., but it inflicts a hardship upon Messrs. du Cros. We expect they will now incorporate some registered specific device with their initials, in order adequately to protect themselves against the "passing off " by other (Timers of other taxicabs. London Traffic Rivals.

The latest comparisons between receipts are afforded by the following tabular data:

Walthamstow U.D.C. has bought a Mann steam roller, which is convertible to a tip wagon or a watering cart, at £620.

Wimbledon Town Council invites tenders for a motor ambulance in accordance with the specification of the superintendent of the fire brigade.

Northampton Town Council has granted licences to the Wellingborough Motor Onaribus Co., Ltd., subject to a minimum charge of 3d. a journey in the borough.

The services which the Great Eastern Railway has been running in and around Chelmsford were taken over last month by the National Steam Car Co., Ltd.

The Coventry City Council has deferred action upon the recommendation of the Waterworks and Eire Brigade Committee, in favour of the purchase of a motor first-aid machine and a motor fire-engine, until October next. Luton Town Council wishes to receive tenders, on or before the 19th inst., for a motor fire-engine. The borough engineer will supply particulars.

The Select Committee of the House of Commons, of which Sir George Toulmin is chairman, which was appointed last November to investigate " the increasing number of fatal accidents in the Metropolis due to motor omnibuses and other forms of power-driven vehicles," met on Tuesday last to consider its report. We have reason to believe that some members of the Committee, and particularly Mr. Kellaway, desire that the terms of the report 'should go far beyond and much outside the specific terms of reference.

Mr. Lyon Thomson, the Mayor of Westminster, presided at the quarterly meeting of the Metropolitan Boroughs Standing Joint Committee, at the Guildhall, on Monday of last week. A resolution was adopted to the effect that any London Traffic Board, for which there is urgent need, should consist, among others, of delegates chosen by the City Corporation and the Metropolitan Borough Councils. It was also resolved not to take any action, at the request of the Croydon Borough Council, in regard to the local taxation of motorbuses, until after the Select Committee of the House of Commons had issued its report in regard to accidents and traffic.