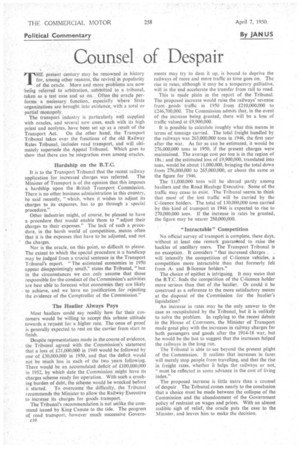 Page 46, 7th April 1950 — Counsel of Despair
Close
Noticed an error?
If you've noticed an error in this article please click here to report it so we can fix it.
Keywords : Haulage, Salter Report, Law / Crime

THE present century may be renowned in history for among other reasons, the revival in popularity of the oracle. More and more problems are now beiiig referred to arbitration, submitted to a tribunal, taken as a test case and so on. Often the oracle performs a necessary function, especially where State organizations are brought into existence, with a total or partial monopoly.

The transport industry is particularly well supplied with oracles, and several new ones, each with its high priest and acolytes, have been set up as a result of the Transport Act. On the other hand, the Transport Tribunal takes over the functions of the old Railway Rates Tribunal, includes road transport, and will ultimately supersede the Appeal Tribunal. Which goes to show that there can be integration even among oracles.

It is to the Transport Tribunal that the recent railway application for increased charges was referred. The Minister of Transport is of the opinion that this imposes a hardship upon the British Transport Commission. There is no other business administration in this country, he said recently, "which, when it wishes to adjust its charges to its expenses, has to go through a special procedure."

Other industries might, of course, be pleased to have a procedure that would enable them to "adjust their charges to their expenses." The lack of such a pr&edure, in the harsh world of competition, means often that it is the expenses that have to be adjusted, and not the charges.

Nor is the oracle, on this point, so difficult to please. The extent to which the special procedure is a handicap may be judged from a crucial sentence in the Transport Tribunal's report. "The estimated economies in 1950 appear disappointingly small," states the Tribunal, "hut in the circumstances we can only assume that those responsible for the conduct of the Commission's activities are best able to forecast what economies they are likely to achieve, and we have no justification for rejecting the evidence of the Comptroller of the Commission."

Most hauliers could say readily how far their customers would be willing to accept this urbane attitude towards a request for a higher rate. The onus of proof is generally expected to rest on the carrier from start to finish.

Despite representations made in the course of evidence, the Tribunal agreed with the Commission's statement that a loss of £21,000,000 in 1949 would be followed by one of £30,000,000 in 1950, and that the deficit Would not be much less in each of the two years following. There would be an accumulated deficit of £100,000,000 in 1952, by which date the Commission might have its charges scheme ready for operation. With such a crushing burden of debt, the scheme would be wrecked before it started. To overcome' the difficulty, the Tribunal recommends the Minister to allow the Railway Executive to increase its charges for •goods transport.

The Tribunal's recommendation is not unlike the command issued by King Canute to the tide. The progress of road transport, however much successive Govern cl 0 ments may try to dam it up, is bound to deprive the railwas of more and more traffic as time goes on. The rise in rates, although it may be a temporary palliative, will in the end accelerate the transfer from rail to road.

No official survey of transport is complete, these days, without at least one remark guaranteed to raise the hackles of ancillary users. The Transport Tribunal is no exception. It considers "that increased charges . . will intensify the competition of C-licence vehicles, a competition more intractable than that formerly felt from Aand B-licence holders."

The choice of epithet is intriguing. It may mean that the B.T.C. finds the competition of the C-licence holder more serious than that of the haulier. Or could it be construed as a reference to the more satisfactory means at the disposal of the Commission for the haulier's liquidation?

An increase in rates may be the only answer to the case as recapitulated by the Tribunal, but it is unlikely to solve the problem. In replying to the recent debate in the House of Commons, the Minister of Transport made great play with the increases in railway charges for both passengers and goods after the 1914-18 war, but he would be the last to suggest that the increases helped the railways in the long run.

The Tribunal is able to see beyond the present plight of the Commission. It realizes that increases in fares will merely stop people from travelling, and that the rise in freight rates, whether it helps the railways or not, "must be reflected in some advance in the cost of living index."

The proposed increase is little more than a counsel of despair The Tribunal comes nearly to the conclusion that a choice must be made between the collapse of the Commission and the abandonment of the Government policy of restraint on wages and prices. With an almost audible sigh of relief, the oracle puts the case to the Minister, and leaves him to make the decision.