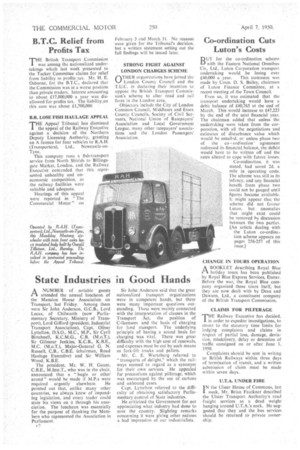 Page 38, 7th April 1950 — B.R. LOSE FISH HAULAGE APPEAL
Close
Noticed an error?
If you've noticed an error in this article please click here to report it so we can fix it.

THE Appeal Tribunal has dismissed the appeal of the Railway Executive against a decision of the Northern Deputy Licensing Authority, granting an A licence for four vehicles to RAIL (Transporters), Ltd., Newcastle-onTyne.

This company runs a fish-transport service from North Shields to Billingsgate Market, London, and the Railway Executive contended that this represented unhealthy and uneconomic competition, as the railway facilities were suitable and adequate.

'Hearings of this appeal were reported in "Thern Commercial Motor" on

February 3 and March 31. No reasons were given for the Tribunal's decision. but a written statement setting out the full findings will be issued later.