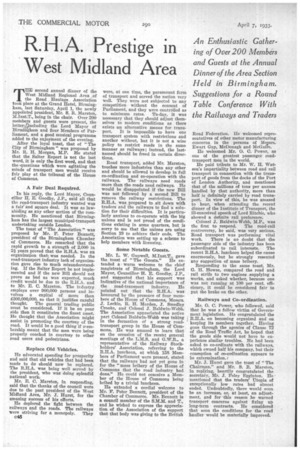 An Enthusiastic Gathering of Over 200 Members and Guests at the Animal Dinner of the Area Section Held in Birmingham. Suggestions for a Round Table Conference With the Railways and Traders

THE second annual dinner of the West Midland Regional Area of the Road Haulage Association took place at the Grand Hotel, Birmingham, last Saturday, April 1, the newly appointed president, Mr. S. R. Marston, M.Inst.T., being in the chair. Over 200 members and guests -were present, the Iatterttincluding the Lord Mayor of Birmingham and four Members of Parliament, and a good musical programme added to the enjoyment of the evening. After the loyal toast, that of "The City of Birmingham" was proposed by Mr. R. H. Morgan, M.P. He stated that the Salter Report is not the last word, it is only the first word, and that the t questions which were agitating the minds of transport men would receive fair play at the tribunal of the House of Commons.

In his reply, the Lord Mayor, Councillor H. E. Goodby, J.P., said all that the road-transport industry wanted was a fair" and square deal. It was as lawabiding as any other section of the community. He mentioned that Birmingham has the largest municipal-transport undertaking outside London.

The toast of "The Association" was proposed by Mr. F. Peter Bennett, president of the Birmingham Chamber of Commerce. He remarked that the rapid growth to a strength of 2,000 in 2i years proved that the R.H.A. was an organization that was needed. In the road-transport industry lack of organization gave rise to much misunderstanding. If the Salter Report be not implemented and if the new Bill should not prove as bad as was expected, much credit would be due to the R.U.A. and to Mr. E. C. Marston. The industry employs over 900.000 persons and in-. volves a capital of more than £300,000,000, so that it justifies careful thought. The general trading public must be considered. If it be on your side then it constitutes the finest asset. He thought that the Association might assist in promoting the courtesy of the road. It would be a good thing if membership meant that the men were being properly coached in courtesy to other road users and pedestrians.

He advocated spending for prosperity and said that old vehicles that had been made to do should now be replaced. The R.H.A. was being well served by the president, who was doing splendid national work.

Mr. E. C. Marston, in responding, said that the thanks of the council were due to the past president of the West Midland Area, Mr. j. Hurst, for the amazing success of his efforts.

He deplored the fight between the railways and the roads. The railways were striving for a monopoly. They

were, at one time, the paramount form of transport and served the nation very well. They were not subjected to any competition without the consent of Parliament, and they were controlled as to minimum rates. To-day, it was necessary that they should adjust themselves to modern conditions as there exists an alternative means for trans port. It is impossible to have one transport system with restrictions and another without, but it is not a wise policy to restrict roads in the same manner as railways; instead, the lastnamed should be freed in certain directions.

Road transport, added Mr. Marston, touches more industries than any other and should be allowed to develop in full co-ordination and co-operation with the railways. The railways need roads more than the roads need railways. He would be disappointed if the new Bill was not followed by a second Bill to remove the railway restrictions. The R.H.A. was prepared to sit dawn with traders and the railways to find a solution for their difficulties. It is particularly anxious to co-operate with the big unions and is not proud of the conditions existing in some quarters, but is sorry to see that the unions are using Section 19 to achieve their ends. The Association was setting up a scheme to help members with licensing.

Mr. L. W. Gupwell, 11.Inst.T., gave the toast of "The Guests." He extended rt, warm welcome to the chief magistrate of Birmingham, the Lord Mayor, Councillor H. E. Goodby, J.P., and suggested that his support was indicative of the national importance of the road-transport industry. He pointed out that the R.H.A. was honoured by the presence of four members of the House of Commons, Messrs. J. Leckie, R. H. Morden' J. Smedley Crooke, and Colonel J. Baldwin-Webb. The Association appreciated the active part Colonel Baldwin-Webb was taking in the formation of a strong roadtransport group in the House of Commons. He was amazed to learn that on the occasion of the recent general meetings of the L.M.S. and G.W.R., a representative of the Railway Stockholders' Association, referring to the R.H.A. luncheon, at which 158 Members of Parliament were present, stated that the railways had not yet gone in for the "mass bribery of the House of Commons that the road industry had done." He could not conceive a Member of the House of Commons being bribed by a trivial luncheon.

He extended a cordial welcome to Mr. F. Peter Bennett, president a the Chamber of Commerce. Mr. Bennett is a council member of the S.M.M. and T., and he wished to express the appreciation of the Association of the support that that body was giving to the British

Road Federation. He welcomed representatives of other motor manufacturing concerns in the persons of Megsrs. Ewart Guy, McDonagh and McGuire.

He welcomed Mr. 0. C. Power, as one of the greatest passenger roadtransport men in the world. He paid tribute to Mr. W. H. Watson's impartiality between road and rail transport in connection with the transport of goods from the docks of the Port of London Authority, and mentioned that of the millions of tons per annum handled by that authority, more than half is definitely carried by road transport. In view of this, he was amazed to bear, when attending the recent dinner of the Institute of Transport, the ill-conceived speech of Lord Ritchie, who showed a definite rail preference.

Colonel J. Baldwin-Webb, M.P., was the first to respond. The road-rail controversy, he said, was very serious. Road transport was performing vital work. There is no doubt that the passenger side of the industry has been subordinated to rail interests. The recent R.H.A. luncheon helped the cause enormously, but he strongly resented any suggestion of mass bribery.

Responding to the same toast, Mr. G. H. Howse, compared the road and rail strife to two engines supplying a works, and asked whether, because one was not running at 100 per cent. efficiency, it could be considered fair to put the brake on the other.

Mr. 0. C. Power, who followed, said that he was a fellow victim of Government legislation. He congratulated the R.H.A. on becoming organized and on keeping its members together. Having gone through the agonies of Clause 72 of the Road Traffic Act, he hoped that the goods side would not have to experience similar troubles. He had been asked to co-ordinate with the railways, which owned half his company, but their conception of co-ordination appears to be extermination.,

Mr. J. Hurst gave the toast of "The Chairman." and Mr. S. R. Marston, in replying, heartily congratulated the secretary, Mr. J. Foley Egginton. He mentioned that the traders' Utopia of exceptionally low rates had almost ended. Undoubtedly, there would soon be an increase, or, at least, an adjustment, and for -this reason he warned transport concerns against fixing up long-term contracts. He considered that soon the conditions for the road haulier would be materially improved.