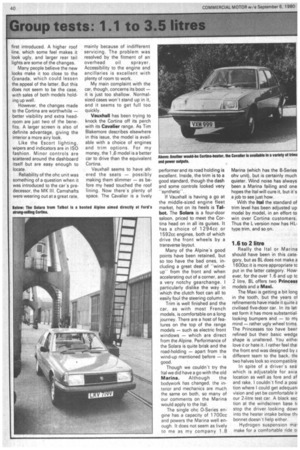 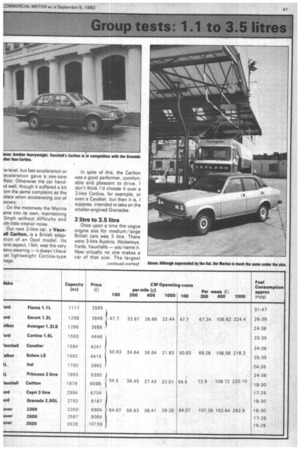 first introduced. A higher roof line, which some feel makes it look ugly, and larger rear tail lights are some of the changes.

Many people believe the new looks make it too close to the Granada, which could lessen the appeal of the latter. But this does not seem to be the case, with sales of both models holding up well.

However, the changes made to the Cortina are worthwhile — better visibility and extra headroom are just two of the benefits. A larger screen is also of definite advantage, giving the interior a more airy look.

Like the Escort lighting, wipers and indicators are in ISO fashion. Minor controls are scattered around the dashboard itself but are easy enough to locate.

Reliability of the ohc unit was something of a question when it was introduced to the car's predecessor, the MK Ill. Camshafts were wearing out at a great rate, mainly because of indifferent servicing. The problem was resolved by the fitment of an overhead oil sprayer. Accessibility to the engine and ancillaries is excellent with plenty of room to work.

My main complaint with the car, though, concerns its boot — it is just too shallow. Normalsized cases won't stand up in it, and it seems to get full too quickly.

Vauxhall has been trying to knock the Cortina off its perch with its Cavalier range. As Tim Blakemore describes elsewhere in this issue, the model is available with a choice of engines and trim options. For my money, the 1.6 model is a better car to drive than the equivalent Cortina.

Vauxhall seems to have altered the seats — possibly making them slimmer — as before my head touched the roof 'lining. Now there's plenty of space. The Cavalier is a lively performer and its road holding is excellent. Inside, the trim is to a good standard, though the dash and some controls looked very "synthetic'',

if Vauxhall is having a go at the middle-sized engine fleet market, hot on its heels is Talbot. The Solara is a four-door saloon, priced to meet the Cortina head on in all its guises. It has a choice of 1294cc or 1592cc engines, both of which drive the front wheels by a transverse layout.

Many of the Alpine's good points have been retained, but so too have the bad ones, including a great deal of -windupfrom the front and when accelerating out of a corner, and a very notchy gearchange. I particularly dislike the way in which the clutch foot can all to easily foul the steering column.

Trim is well finished and the car, as with most French models, is comfortable on a long journey. There are a host of features on the top of the range models — such as electric front windows — which are direct from the Alpine. Performance of the Solara is quite brisk and the road-holding — apart from the wind-up mentioned before — is good.

Though we couldn't try the Rai we did have a go with the old Marina. Although t he bodywork has changed, the interior and mechanics are much the same on both, so many of our comments on the Marina would apply to the Ital.

The single ohe 0-Series engine has a capacity of 1700cc and powers the Marina well enough. It does not seem as lively to me as my company 1 8 Manna (which has the B-Series ohv unit), but is certainly much quieter. Wind noise has always been a Marina failing and one hopes the hal will cure it, but it's a job to see just how.

With the hal the standard of trim level has been adjusted up model by model, in an effort to win over Cortina customers. Thus the L version now has H Ltype trim, and so on

Really the ltal or Marina should have been in this category, but as BL does not make a 1600cc it is more appropriate tc put in the latter category. However, for the over 1.6 and up tc 2 litre, BL offers two Princess models and a Maxi.

The Maxi is getting a bit long in the tooth, but the years oi refinements have made it quite a civilised five-door car. In its lat. est form it has more substantial. looking bumpers and — to my mind — rather ugly wheel trims The Princesses too have beer refined but their basic wedgE shape is unaltered. You eithel love it or hate it. I rather feel tha the front end was designed by E different team to the back, thE two halves look so incompatible

In spite of a driver's sea which is adjustable for axia location as well as fore and at and rake, I couldn't find a posi tion where I could get adequati vision and yet be comfortable ir our 2-litre test car. A black sec ton at the windscreen base tc stop the driver looking dowr into the heater intake below thi bonnet doesn't help either_

Hydrogen suspension ma, make for a comfortable ride al le level, but fast acceleration or leceleration gave a see-saw ffect. Otherwise the car handKl well, though it suffered a bit -om the same complaint as the olara when accelerating out of orners.

On the motorway the Marina ame into its own, maintaining Omph without difficulty and rith little interior noise.

Our next 2-litre car, a Vauxall Canton, is a British adap3tion of an Opel model. Its iorst aspect, I felt, was the very eavy steering it doesn't have

at lightweight Cortina-type nage. In spite of this, the Carlton was a good performer, comfortable and pleasant to drive. I don't think I'd choose it over a 2-litre Cortina, for example, or even a Cavalier, but then it is, I suppose, intended to take on the smaller-engined Granadas.

Once upon a time the vogue engine size for medium /large British cars was 3 litre. There were 3-litre Austins, VVolseleys, Fords, Vauxhalls you name it. Now virtually no one makes a car of that size. The largest