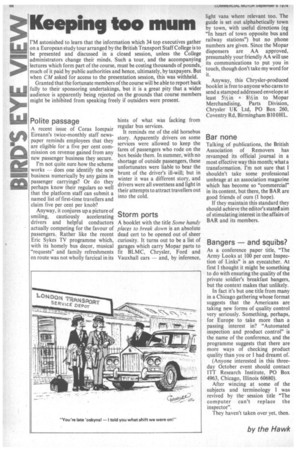 Page 68, 6th September 1974 — Bangers — and squibs?
Close
Noticed an error?
If you've noticed an error in this article please click here to report it so we can fix it.

As a conference paper title, "The Army Looks at 100 per cent Inspection of Links" is an eyecatcher. At first I thought it might be something to do with ensuring the quality of the private soldier's breakfast bangers, but the context makes that unlikely.

In fact it's but one title from many in a Chicago gathering whose format suggests that the Americans are taking new forms of quality control very seriously. Something, perhaps, for Europe to take more than a passing interest in? "Automated inspection and product control" is the name of the conference, and the programme suggests that there are more ways of checking product quality than you or I had dreamt of.

After wincing at some of the subjects and terminology I was revived by the.session title "The computer can't replace the inspector".

They haven't taken over yet, then.