Where One-man Working for Double-deckers is Favoured 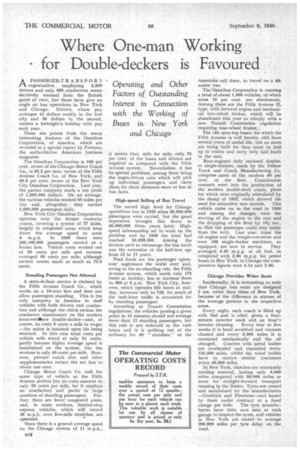 Page 30, 6th September 1940 — Where One-man Working for Double-deckers is Favoured
Close
Noticed an error?
If you've noticed an error in this article please click here to report it so we can fix it.

APASSENGER-TRANSPORT organization employing 2,500 drivers and only 400 conductors seems decidedly unusual from the British point of view, but those facts give an angle on bus operations in New York and Chicago. Drivers, whose pay averages 42 dollars weekly in the first city and 39 dollars in the second, receive a fortnight's holiday with pay each year.

These are points from the many interesting features of the • Omnibus Corporation,. of . America, which are revealed in A pecial report by Fortune, the authoritative American business

The Omnibus Corporation is 100 Per cent. owner, of the Chicago Motor Coach Co, is 92.2-per cent, owner of the Fifth Avenue Coach Co. of New .York, and 49.9 per cent. owner of the New. York City Omnibus Corporation. List year, the parent company made a net profit of 1,500,000 dollars. On an average, the various vehicles worked 68 miles per day • and, " altogether, they carried 1,000,000 passengers daily.

New York City Omnibus Corporation operates over the former tramway routes, covering a system of 77 miles, largely in congested areas which keep down the average speed to some 6 m.p.h. In 1939 there were 268,100,000 passengers carried at a 5-cent fare. Vehicle costs worked out at 50 cents per mile and revenue averaged 60 cents per mile; although certain routes made as much as 73.5 cents.

Standing Passengers Not Allowed A semi-de-luxe service is claimed by the Fifth Avenue Coach Co., which works on a 10-cent fare and does not allow passengers standing. This is the only company in America to staff vehicles with both drivers and conductors and although the chiefs reckon the conductor unnecessary on the modern front-entlince double-decker—and, of course, he costs 8 cents a mile in wages —the union is insistent upon his being retained. In this case total costs per vehicle mile stand at only 51 cents, partly because higher average speed is maintained on the system, but the revetue is only 49 cents per mile. However, private coach hire and other supplementaries reduce the net loss to about one cent.

Chicago Motor Coach Co. use's the same type of vehicle as the Fifth Avenue section but its costs amount to only 32 cents per mile, for it employs no conductors and packs in large numbers of standing passengers. Further, there are fewer congested areas, and, in some sections, limited-stop express vehicles, which will record 35 m.p.h, over five-mile stretches, are operated.

Since there is a general average speed on the Chicago system of 11 m.p.h.,

it means that, mile for mile, only 75 per cent, of the buses and drivers are required as compared with the Fifth Avenue system. Nevertheless, it has its special problems, among them being the negro-driven tabs which will pick up individual passengers and carry them for short distances more or loss at bus fares.

High-speed Selling of Bus Travel The record high level for .Chicago operations was in 1924 when 69,000,000 passengers were carried, but the great depression brought this down to 40,000,000 three years later. Highspeed salesmanship set to work on the problem and by 1939 the total had reached 58,000,000. Among the devices used to encourage the bus habit was the extension of the half-fare age from 12 to 17 years.

Peak loads are the passenger operators' nightmare the world over and, owing to the no-standing rule, the Fifth Avenue system, which needs only 175 buses at midday, has to increase them to 309 at 6.p.m. New York City, however, which operates 531 buses at midday, increases only to 728, for much of the rush-hour traffic is accounted for by standing passengers According to Transit Commission regulations, the vehicles passing a given point in 15 minutes should not average more than 12 standing passengers, but this rule is not enforced in the rush hours and it is nothing out of the ordinary for 40 " standees," as the American call them, to travel on a 40seater •bus,

The'Orrinibus Corporation is running a total of about 1,800 vehicles, of which some 10 per cent, are obsolescent. Among these are the Fifth Avenue 2L type, with forward engine and mechanical two-wheel brakes, which will be abandoned this year to comply with a new Transit Commission regulation

requiring four-wheel brakes,.' • The 145 open-top buses, for which the Fifth Avenue is well known, •still have several years of useful life, but no more are being built for they must be laid up in winter and carry only half loads in the rain.

• Rear-engined fully enclosed double-. or-single-deckers, Made by the Yellow Truck and Coach Manufacturing. Co. comprisemost of the modern 90 per cent, of the fleet. Considerable research went into the production of the modern double-deck coach, plans for which were originally stimulated by the slump of 1932, which showed the need for attractive new models. This vehicle came on to the road in 1936 and among the changes were the moving of the engine to the rear' and the dropping of the floor by 16i ins., so' that the passenger could step easily from the kerb. Last year, came the oil engine and the torque-converter and over 160 single-decker machines, so

Chicago Provides Wider Seats Incidentally, it is interesting to note that Chicago bus seats are designed 2 ins, wider than thbse of New York, because of the difference in stature of the average persons in the respective areas.

Every night, each coach is filled up with fuel and is oiled, given a fourminute exterior wash and an hour's interior cleaning. Every four or five weeks it is hand scrubbed and vacuum cleaned and every 3,000 miles it is examined mechanically and the oil changed. Coaches with metal bodies are overhauled and repainted every 125,000 miles, whilst the wood bodies have to receive similar treatment every 40,000 miles.

In New York, clutches are constantly needing renewal, lasting only 5,000 miles compared with 50,000 miles or more for straight-forward 'transport running in the States. Tyres are owned and maintained by the manufacturers —Goodrich and Firestone—and leased by them under contract at a fixed charge per mile. The tyre manufacturers have their own men at each garage to inspect the tyres, and vehicles in New York are stated to average 200,000 miles per tyre delay on the road.