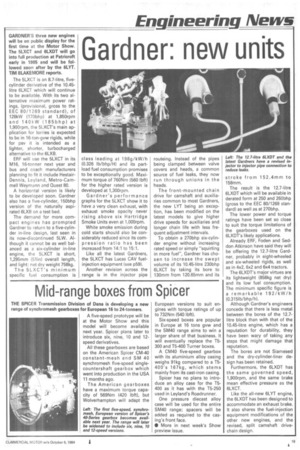 GARDNER'S three new engines will be on public display for the first time at the Motor Show. The 5LXCT and 6LXDT will go into full production at Patricroft early in 1985 and will be followed soon after by the 6LYT. TIM BLAKEMORE reports.

ERF will use the 5LXCT in its M16, 16-tonner next year and bus and coach manufacturers planning to fit it include HestairDennis, Leyland, Metro-Cammell Weymann and Quest 80.

A horizontal version is likely to be developed soon. Gardner also has a five-cylinder, 150bhp version of the naturally aspirated 6LX8 on a test bed.

The demand for more compact engines has prompted Gardner to return to a five-cylinder in-line design, last seen in its now-discontinued 5LW. Although it cannot be as well balanced as a six-cylinder in-line engine, the 5LXCT is short, 1,295mm (51in) overall length, and light: net dry weight 758kg.

The 5LXCT's minimum specific fuel consumption is class leading at 198g/kW/h (0.326 lb/bhp/F1) and its partload fuel consumption promises to be exceptionally good. Maximum torque of 760Nm (560 lbft) for the higher rated version is developed at 1,300rpm.

Gardner's performance graphs for the 5LXCT show it to have a very clean exhaust, with exhaust smoke opacity never rising above six Hartridge Smoke Units even at 1,000rpm.

White smoke emission during cold starts should also be considerably reduced since its compression ratio has been increased from 14:1 to 15:1.

Like all the latest Gardners, the 5LXCT has Lucas CAV fuelinjection equipment (see p59).

Another revision across the range is in the injector pipe routeing. Instead of the pipes being clamped between valve covers and heads, a common source of fuel leaks, they now run through unions in the 'heads.

The front-mounted chain drive for camshaft and auxiliaries common to most Gardners, the new LYT being an exception, has been modified on the latest models to give higher drive speeds for auxiliaries and longer chain life with less frequent adjustment intervals.

The lower power and torque ratings have been set so close to suit the torque limitations of the gearboxes used on the 6LXDT's likely applications.

Already ERF, Foden and Seddon Atkinson have said they will be offering the 12.7-litre Gardner, probably in eight-wheeled and six-wheeled rigids, as well as in 4x2, 6x2 and 6x4 tractors.

The 6LXDT's major virtues are its lightweight (858kg net dry) and its low fuel consumption. The minimum specific figure is a remarkable 192 /kW/h (0.315Ib/bhp/h).

Although Gardner's engineers concede that there is less metal between the bores of the 12.7 litre block than with that of the 10.45-litre engine, which has a reputation for durability, they have been wary of taking any steps that might damage that reputation.

The bores are not Siamesed and the dry-cylinder-liner design has been retained.

Furthermore, the 6LXDT has the same governed speed, 1,900rpm, and the same brake mean effective pressure as the 6LXCT.

Like the all-new 6LYT engine, the 6LXDT has been designed to accommodate an exhaust brake. It also shares the fuel-injection equipment modifications of the other new engines, and the revised, split camshaft drivechain design.