Dardner Bristol wins by a whisker 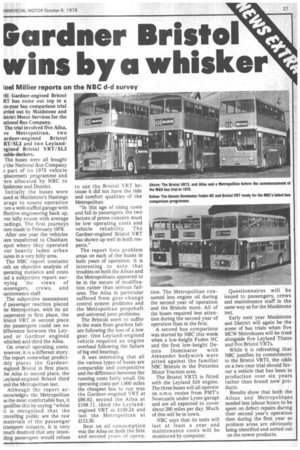 Gardner-engined Bristol RT has come out top in a vo-year bus comparison trial irried out by Maidstone and istrict Motor Services for the ational Bus Company.

The buses were all bought y the National Bus Company s part of its 1975 vehicle placement programme and rere allocated by NBC to Iaidstone and District. Initially the buses were ased at Maidstone's Hastings arage to assess operation -om a well staffed garage with ffective engineering back up, ver hilly routes with average Dadings. The first journeys vere made in February 1976. After one year the vehicles /ere transferred to Chatham epot where they operated ,ver heavily laden urban outes in a very hilly area. The NBC report contains ooth an objective analysis of operating statistics and costs .nd a subjective report sur 'eying the views of oassengers, crews, and naintenance staff.

The subjective assessment )f passenger reaction placed he Metropolitan, with its air ;uspension in first place, the 3ristol VRT in second place the passengers could see no lifference between the Leyand or Gardner engined Tehicles) and third the Ailsa.

On overall operating costs, Iowever, it is a different story. fhe report somewhat predictibly places the Gardnermgined Bristol in first place, :he Ailsa in second place, the Leyland-engined Bristol third and the Metropolitan last.

Although the report acknowledges the Metropolitan as the most comfortable bus, it qualifies this by saying "whilst it is recognised that the travelling public are the raw materials of the passenger transport industry, it is very much doubted that any intending passengers would refuse to use. the Bristol VRT because it did not have the ride and comfort qualities of the Metropolitan.

"In this age of rising costs and fall in passengers, the two factors of prime concern must be low operating costs and vehicle reliability. The Gardner-engined Bristol VRT has shown up well in both respects."

The report lists problem areas on each of the buses in both years of operation. It is interesting to note that troubles on both the Ailsas and the Metropolitans appeared to be in the nature of modification rather than serious fail ures. The Ailsa in particular suffered from gear-change control system problems and the Metropolitan propshaft and universal joint problems.

The Bristols seem to suffer in the main from gearbox fail ure following the loss of a low gear. One Leyland-engined vehicle required an engine overhaul following the failure of big end bearings.

It was interesting that all the various types of buses are comparable and competitive and the difference between the running costs fairly small. On operating costs per 1,000 miles the cheapest bus to run was the Gardner-engined VRT at £90.82, second the Ailsa at £108.71, third the Leylandengined VRT at £109.24 and last the Metropolitan at £113.30.

A second bus comparison was started by NBC this week when a low-height Foden NC and the first low-height Dennis Dominator. with Alexander bodywork were pitted against the familiar NBC Bristols in the Potteries Motor Traction area.

The Bristol VRT3 is fitted with the Leyland 510 engine. The three buses will all operate on o.m.o. routes from PMT's Newcastle under Lyme garage and are all expected to cover about 200 miles per day. Much of this will be in town.

NBC says that its tests will last at least a year and maintenance costs will be monitored by computer. Questionnaires will be issued to passengers, crews and maintenance staff in the same way as for the Maidstone test.

Early next year Maidstone and District will again be the scene of bus trials when five MCW Metrobuses will be tried alongside five Leyland Titans and five Bristol VRTs.

While it is refreshing that NBC justifies its commitment to the Bristol VRT3, the odds on a two-year trial should favour a vehicle that has been in production over six years rather than brand new products.

Results show that both the Ailsas and Metropolitans needed less labour hours to be spent on defect repairs during their second year's operation then during the first year so problem areas are obviously being identified and sorted out on the newer products.