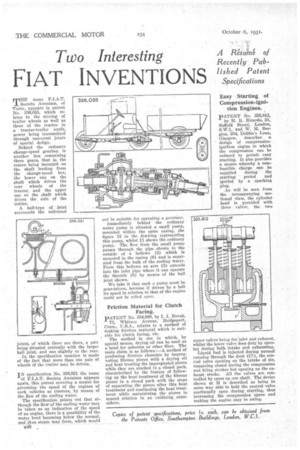 A Rjsuing of Recently Published Patent Specifications THE name F.I.A.T. Societa Anonima, of Turin. appears in patent No. 356,055, which relates to the driving of trailer wheels as well as those of the tractor in a tractor-trailer outfit, power being transmitted through universal joints of special design.

A ball-type of joint surrounds the universal joints, of which there are three, a pair being situated centrally with the larger ball joint, and one slightly to the rear. In the specification mention is made of the fact that more than one pair of wheels of the trailer may be driven.

of Societe Anonima appears again, this patent covering a means for governing the speed of the engines of such vehicles as tractors, by means of the flow of the cooling water.

The specification points out that although the flow'of the cooling water may he taken as an indication of the speed of an engine, there is a possibility of the water level becoming below the normal, and .thus steam may form, which would B48 not be suitable for operating a governor.

Immediately behind the • ordinary water pump is situated, a small pump, mounted within the same casing, the . figure 12 in the drawing representing this pump, whilst 11 shows the .ordinary Pump. The flow from the small Pump passes through the pipe shown to the outside of a bellows (2) which is mounted in the casing (6) and is separated from the bulk of the cooling water. From this bellows an arm (3) extends into the inlet pipe where it can operate the throttle (5) by means of the ball joint shown.

We take it that such a pump must be gear7driven, because if driven by a belt its speed in relation to that of the engine could not be relied upon.

The method is one in which, by special means, drying oil can be used as a bond for asbestos or other fibre. The main claim is as follows :—A method of producing friction elements by impregnating fibrous pieces with a drying oil and heat treating the impregnated pieces while they are stacked in a closed pack, characterized by the feature of following up the heat treatment of the fibrous pieces in a closed pack with the steps of separating the pieces after this heat treatment and continuing the heat treatment while maintaining the pieces in spaced relation in an oxidizing atmosphere. Easy Starting of Compression-ignition Engines.

by H. II. Ricardo, 21, Suffolk Street, London, S.W.1, and W. M. Bergins, 254, Dobbie's Loan, Glasgow, describes a design of compressionignition engine engine in which the compression can be reduced to permit easy starting. It also provides a means whereby a combustible charge can be supplied during• the starting period and ignited by a sparking

As will be seen from the • accompanying sectional view, the cylinder bead is provided with three valves, the two upper valves being for inlet and exhaust, whilst the lower valve does duty by opening during both intake and exhausting.

Liquid fuel is injected during normal running through the duct (C1), the central valve opening on the intake of air, remaining closed during the compression and firing strokes but opening on the exhaust stroke, All the valves are controlled by cams on one shaft. The device

shown at M described as being in some way able' to hold the central valve continually open during starting, thus increasing the compression space and making the engine easy to swing.