BRIEF ITEMS OF NEWS FROM THE TRAFFIC AREAS' 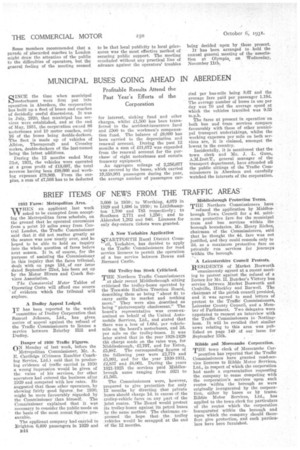 Page 62, 6th October 1931 — BRIEF ITEMS OF NEWS FROM THE TRAFFIC AREAS'
Close
Noticed an error?
If you've noticed an error in this article please click here to report it so we can fix it.
Keywords : Ribble Motor Services, Silver Line, Transport, Business / Finance

WHEN an applicant last week asked to he exempted from accepting the Metropolitan fares schedule, on the ground that he operated excursions from a point 10 miles away from Central London, the Traffic Commissioner said that it did not matter greatly as the season was now nearly over, and he hoped to be able to hold an inquiry into the whole question of fares before next season. It is, of course, for the purpose of assisting the Commissioner in this inquiry that the, fares tribunal, dealt with on page 184 of our issue dated September 22nd, has been set up by the Motor Hirers and Coach Services Association.

The Commercial Motor Tables of Operating Costs will afford one source of evidence which the tribunal will explore.

IT has been reported to the watch committee of Dudley Corporation that Samuel Johnson, Ltd., has given notice of appeal against the refusal of the Traffic Commissioners to license a service between Brierley Hill and Dudley.

Danger of 1930 Traffic Figures. ON Monday of last week, before the

Metropolitan Commissioner, Mr. A. E. Cartliclge (Crimson Rambler Coaching Service, Ltd.) said that in producing evidence of traffic carried in 1930 a wrong impression would be given of the value of his services, for other operators had entered the business after 1929 and competed with low rates. He suggested that those other operators, by showing fairly •good figures for 1930, might be more favourably regarded by the Commissionerthan himself. The Commissioner explained that it was necessary to consider the public needs on the basis of the most recent figures pro-. curable.

A New Yorkshire Application STARTFORTH Rural District Coun cil, Yorkshire, has decided to apply to the Traffic Commissioners for road service licences to permit the operation of a bus service between 13owes and Barnard Castle.

THE Northern Traffic Commissioners at -their recent Middlesbrough sitting criticized the trolley-buses operated by the Tees-side Railless Traction Board, describing them as being "about fit to carry cattle to market and nothing more." They were also described as being " picturesquely obsolescent." The board's representative was cross-examined on behalf of the United Automobile Services, Ltd., and stated •that there was a loss of 1.68d. per vehiclemile on the board's motorbuses, and 3d. per mile on the trolley-buses. It was Inter stated that in the year 1928-1829 th'e charge made on the rates was, for Middlesbrough, •P2,797, and for Eaton, £5,987. The corresponding figures of the following year were £2,778 and £5,991, and for the year 1930-1931, £2,837 and £6,061. During the years 1921-1925 the services paid Middlesbrough sums ranging from £621 to £1,565.

• The Commissioners were, however, prepared to give protection for only 12 months by directing that private buses should charge ld. in excess of .the • trolley-vehicle fares on. any part of the joint routes. The Board would protect its trolley-buses against its petrol buses by the same method: The chairman expressed the hope that the trolley . vehicles would be scrapped at the end of the 12 months. Middlesbrough Protection Terms. TEE Northern Commissioners have refused the application by Middlesbrough Town Council for a 4d. minimum protective fare for the municipal tram and bus services within the borough boundaries. Mr. Henry Riches, chairman of the Commissioners, said that he thought the 4d. fare was not justified, and they could concede only to 3d. as a maximum protective fare on privately run services for journeys within the borough.

A Leicestershire Council Protests. RESIDENTS of Market Bosworth unanimously agreed at a recent meeting to protest against the refusal of a licence for Mr. E. Butcher's Victory bus service between Market Bosworth and Coalville, Hinckley and Barwell. The chairman of the parish council presided, and it was agreed to send letters of protest to the Traffic Commissioners, Leicester County Council, and a Member of Parliament. Two delegates were appointed to request an interview with the Traffic Commissioners in Nottingham. It will be recalled that similar news relating to this area was published on page 149 of our issue for September 15th.