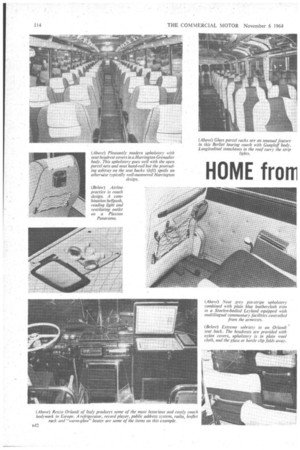 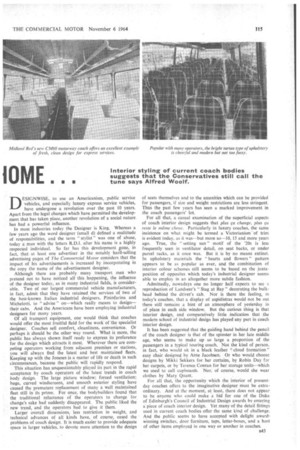 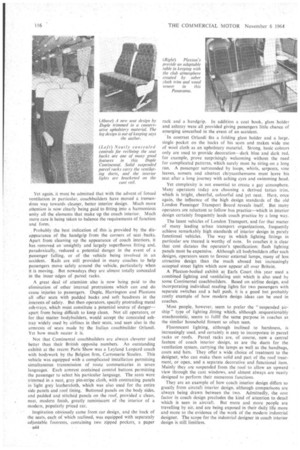 DESIGNW1SE. to use an Americanism, public service vehicles, and especially luxury express service vehicles, have undergone a revolution over the past 10 years. Apart from the legal changes which have permitted the development that has taken place, another revolution of a social nature has had a powerful influence.

In most industries today the Designer is King. Whereas a few years ago the word designer (small d) defined a multitude of responsibilities, and the term " stylist" was one of abuse, today a man with the letters RD.!. after his name is a highly respected individual. So far has this development gone, in fact, that at least one advertiser in the notably hart-selling advertising pages of The Commercial Motor considers that the impact of his advertisements is increased by incorporating in the copy the name of the advertisement designer. Although there are probably many transport men who pretend not to have noticed all this happening, the influence of the designer today, as in many industrial fields, is considerable. Two of our largest commercial vehicle manufacturers, in fact, admit that they have retained the services of two of the best-known Italian industrial designers, Pininfarina and Michelotti, to " advise " on—which really means to design— their cabs. And the Americans have been employing industrial designers for many years.

Of all transport equipment, one would think that coaches would offer the most fruitful field for the work of the specialist designer. Coaches sell comfort, cleanliness, convenience. Or perhaps it should be the other way round. What is more, the public has always shown itself ready to express its preference for the design which attracts it most. Wherever there are competing operators working from adjacent premises or stations, you will always find the latest and best maintained fleets. Keeping up with the Joneses is a matter of life or death in such circumstances, because the public will rapidly respond.

This situation has unquestionably played its part in the rapid acceptance by coach operators of the latest trends in coach body design. The large picture window; forced ventilation; huge, curved windscreens, and smooth exterior styling have caused the premature replacement of many a well maintained fleet still in its prime. For once, the bodybuilders found that the traditional reluctance of the operators to change for change's sake had suddenly disappeared. The nublic, liked the new trend, and the operators had to give it them.

Larger overall dimensions, less restriction in weight, and technical advances of all kinds have, of course, eased the problems of coach design. It is much easier to provide adequate space in larger vehicles, to devote more attention to the design of seats themselves and to the amenities which can be provided for passengers, if size and weight restrictions are less stringent. Thus the past few years has seen a marked improvement in the coach passengers' lot.

For all that, a casual examination of the sunerficial aspects of coach interior design suggests that plus ca change, plus ca reste le Mellie chose. Particularly in luxury coaches, the same insistence on what might be termed a Victorianism of trim is evident today, as it was—but more so-10, 15 and more years ago. True, the "setting sun" motif of the '20s is less frequently seen in ventilator detail, on seat backs, or under parcel racks, as it once was. But it is by no means extinct. In upholstery materials the "hearts and flowers" pattern appears to be as popular as ever, and the combination of interior colour schemes still seems to be based on the juxtaposition of opposites which today's industrial designer seems able to employ in an altogether more subtle fashion.

Admittedly, nowadays one no longer half expects to see a reproduction of Landseer's "Stag at Bay" decorating the bulkhead behind the driver's cab. Nor is there the feeling, in today's coaches, that a display of aspidistras would not be out there still remains a hint of an atmosphere of yesterday in of place in each side window. But the curious thing is that interior design, and comparatively little indication that the modern school of industrial design has played any part in coach interior design.

It has been suggested that the guiding hand behind the pencil of the coach designer is that of the spinster in her late middle age, who seems to make up so large a proportion of the passengers in a typical touring coach. Not the kind of person, in fact, who would sit in a black leather "cloud formation" easy chair designed by Arne Jacobsen. Or who would choose designs by Mikki Sekkers for her curtains, by Robin Day, for her carpets, or by Terence Conran for her storage units—which we used to call cupboards. Nor, of course, would she wear clothes by Mary Quant.

For all that, the opportunity which the interior of presentday coaches offers to the imaginative designer must be extraordinary. And at the moment, at least, there does not appear to be anyone who could make a bid for one of the Duke of Edinburgh's Council of Industrial Design awards by entering a piece of coach interior design. Yet many of the detail fittings used in current coach bodies offer the same kind of challenge. And the public seems to have accepted with delight awardwinning switches, door furniture, taps, letter-boxes, and a host of other items employed in one way or another in coaches. • Yet again, it must be admitted that with the advent of forced ventilation in particular, coachbuilders have moved a tremendous way towards cleaner, better interior design. Much more attention is now clearly beingpaid to fitting into a harmonious unity all the elements that make up the coach interior. Much more care is being taken to balance the requirements of function and form.. • Probably the best indication of this is provided by the disappearance of the handgrip from the corners of seat backs. Apart from cleaning up the appearance of coach interiors, it has removed an 'unsightly and largely superfluous fitting and, paradoxically, -reduced a potential danger in the event of a passenger falling, or of the vehicle being involved in an accident. Rails are still provided in many coaches to help passengers move safely around the vehicle, particularly when it is moving. But nowadays they are almost totally concealed in the inner 'edges of parcel racks.

A great deal Of attention also is now being paid to the elimination of other internal protrusions which can and do cause injuries to passengers. Duple, .Harrington and Plaxtons all offer seats with padded backs and soft headrests in the interests of safety. But then operators, specify protruding metal ash-trays. which must constitute a potential Source of danger— apart. from being-difficult to keep clean. Not all operators, or for that matter bodybuilders, would accept the concealed ashtray widely used by airlines in their seats, and seen also in the armrests of seats made by the Italian coachbuilder Orlandi. Yet how much neater it is.

Not that Continental coachbuilders are always cleverer and better than their British opposite numbers, An outstanding exhibit at the recent Paris Show was a Leyland Leopard coach with bodywork by the Belgian firm, Carrosserie Stoelen. This vehicle was equipped with a complicated installation permitting simultaneous transmission of route commentaries in seven languages. Each armrest contained control buttons permitting the passenger to select his particular language. The seats were trimmed in a neat, grey pin-stripe cloth, with contrasting panels in 'light grey leathercloth, which was also used for the entire side panels and roof lining. Buttoned panels on the body sides, and padded and stitched panels on the roof, provided a clean, neat, modern finish, greatly reminiscent of the interior of a modern, popularly priced ear.

Inspiration obviously came from car design, and the back of the seats, each of which reclined, was equipped with separately adjustable footrests, containing two zipped pockets, a paper azt‘t rack and a handgrip. In addition a coat hook, glass holder and ashtray were all provided giving passengers little chance of emerging unscathed -in the event of an accident.

In contrast Orlandi fits a folding glass holder and a large, single pocket on the backs of his seats and makes wide use of wool cloth as an upholstery material. Strong, basic colours only are used to provide decoration—dark blue and dark red, for example, prove surprisingly welcoming without the need for complicated patterns, which surely must be tiring. on a long run. A passenger surrounded by loops, whirls, serpents, vine leaves, sunsets and abstract chrysanthemums must leave his seat after a long journey with aching eyes and swimming head.

Yet complexity is not essential to create a gay atmosphere. Many operators today are choosing a derived tartan trim, which is bright, cheerful, colourful and yet neat. Here, once again, the influence of the high design standards of the old London Passenger Transport Board reveals itself. But many operators are reluctant to follow bus practice—which in interior design certainty frequently leads coach practice by a long way.

The latest vehicles of London Transport, and for that matter of many leading urban transport organizations, frequently achieve remarkably high standards of interior design in purely functional vehicles. The way in which lighting fittings in particular are treated is worthy of note. In coaches it is clear that cost dictates the operator's specification: flush 'lighting panels must be expensive. Although all bodybuilders offer such designs, operators seem to favour external lamps, many Of less attractive design than the much abused but increasingly accepted street lights which now appear all over Britain.

A Plaxton-bodied exhibit at Earls Court this year used a combined lighting and ventilating unit which is also used by some Continental coachbuilders. Based on airline design, and incorporating individual reading lights for two passengers with separate switches and a bell push, it is a good but probably costly example of how modern design ideas can be used in coaches.

Most people, however, seem to prefer the "suspended airship " type of lighting .fitting which, although ,unquestionably anachronistie, seems to fulfil the same purpose in coaches as the similar household fitment so often seen.

Fluorescent lighting, although inclined to harshness, is increasingly used, and certainly is easy to incorporate in parcel racks or roofs. Parcel racks are, of course, now a central feature of coach interior design, as are the ducts for the ventilation system, carrying the lamps as well as the handbags, coats and hats. They offer a wide choice of treatment to the designer, who can make them solid and part of the roof treatment, or open, and a separate decorative and _functional item. Mainly they are suspended from the roof,to allow an upward view through the cant windows, and almost always -are neatly designed to perform their numerous functions.

They are an example of how coach interior design differs so greatly from aircraft interior design, although comparisons are always being drawn between the two. Admittedly, the cost factor in coach design precludes the kind of attention to detail which is seen in aircraft. But more and more people are travelling by air, and are being exposed in their daily life more and more to the evidence of the work of the modern industrial designer. The scope for the industrial designer in coach interior design is still limitless.