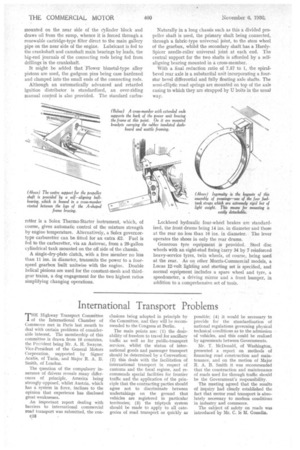 Page 56, 6th November 1936 — International Transport Problems
Close
Noticed an error?
If you've noticed an error in this article please click here to report it so we can fix it.
Keywords :

THE Highway Transport Committee of the International Chamber of Commerce met in Paris last month to deal with certain problems of considerable interest. The membership of this committee is drawn from 16 countries, the Prerident being Mr. A. H. Swayne, Vice-President of the General Motors Corporation, supported by Signor Acutis, of Turin, and Major R. A. B. Smith, of London.

The question of the compulsory insurance of drivers reveals many differences of principle, America being strongly opposed, whilst Austria, which has a system in force, inclines to the opinion that experience has disclosed great weaknesses.

An important report dealing with barriers to international commercial road transport was submitted, the con

c18 elusions being adopted in principle by the Committee, and they will be recom mended to the Congress at Berlin. .

The main points are: (1) the desirability of freedom to travel for ancillary traffic as well as for public-transport services, whilst the status of international goods and passenger transport should be determined by a Convention; (2) this deals with the facilitation of international transport in respect of customs and the fiscal regime, and recommends special facilities for frontier traffic and the application of the principle that the contracting parties should agree not to discriminate between undertakings on the ground that vehicles are registered in particular territories; (3) the triptych system should be made to apply to all categories of road transport as quickly as

possible; (4) it would be necessary to provide for the standardization of national regulations governing physical technical conditions as to the admission of vehicles, and this could be realized by agreements between Governments.

The meeting agreed that the results of inquiry had clearly established the fact that motor road transport is absolutely necessary to modern conditions in industry and commerce.

The subject of safety on roads was introduced by Mr. C. le M. Gosselin.