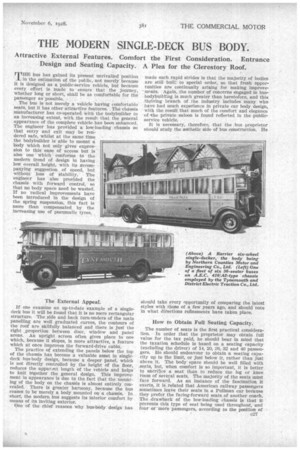 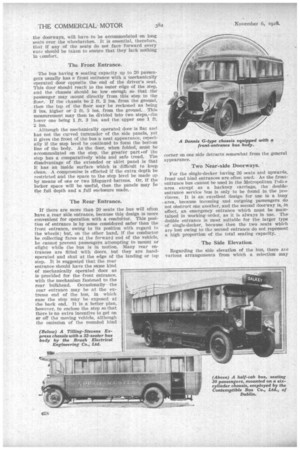 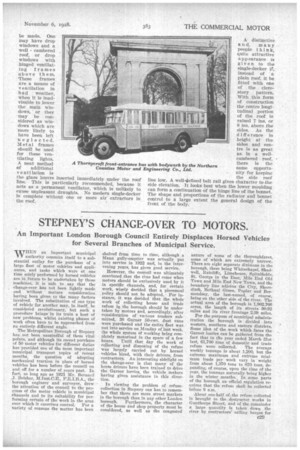 Page 11, 6th November 1928 — THE MODERN SINGLE-DECK BUS BODY.
Close
Noticed an error?
If you've noticed an error in this article please click here to report it so we can fix it.

!THE bus has gained its present unrivalled position in the estimation of the public, not merely because it is designed as a public-service vehicle, but because every effort is made to ensure that the journey, whether long or short, shall be as comfortable for the passenger as possible.

The bus is not merely a vehicle having conafortable seats, but it has other attractive features. The chassis manufacturer has co-operated with the bodybuilder to an increasing extent, with the resuk that the general appearance of the complete vehicle has been enhanced. The engineer has provided a low-loading chassis so that entry and exit may be rendered safe, whilst at the same time the bOdybuilder is able to mount a body which not only gives expression to this ease of access but is also one which conforms to the modern trend of design in having low overall height, with its accompanying suggestion of speed, but without loss of stability. The engineer has also provided the chassis with forward control; so that no body space need be wasted. If no radical improvements have been introduced in the design of the spring suspension, this fact is more than compensated by the increasing use of pneumatic tyres.

If one examine an up-to-date example of a singtedeck bus it will be found that it is no mere rectangular structure. The side and back turn-unders of the main panelling are well graduated curves, the contours of the roof are skilfully balanced and there is just the right ,proportion between door, window and panel areas, An upright screen often gives place to one which, because it slopes, is more attractive, a feature which at once improves the forward-drive cabin.

The practice of extending the panels below the top of the chassis has become a valuable asset in singledeck hus-body design, because a deeper panel, which is not directly controlled by the height of the floor, reduces the apparent length of the vehicle and helps to knit together the general design. This improvement in appearance is due to the fact that the.mounting.of the body on the chassis is altruist entirely concealed. There is greater harmony, because the bus .ceases to -be merely a body mounted on a chassis. In short, the modern bus suggests its interior comfort by means of its inviting exterior.'

One of the chief reasons why bus-body design has

made such rapid strides is that the majority of bodies are still built to special order, so that fresh opportunities are continually arising for making improve' in9nts. Again, the number of concerns engaged in busbodybuilding is much greater than heretofore, and this .thriving branch of the . industry includes many, who have had much experience in private car body design, With the result that much of the comfort and elegance of he private.saloon is found reflected in the-publicservice vehicle.

It is necessary, therefore, that the bus ,proprietor should study the wsthetic side of bus construction. He should take every opportunity of comparing the latest styles with those of a few years ago, and should note in what directions refinements have taken place.

How to Obtain Full Seating Capacity.

The nutnber of seats is the first practical consideration. In order that the proprietor may obtain full value for the tax paid, he should bear in mind that the taxation schedule is based on a seating capacity (excluding the driver) of 14, 20, 2C,32 and 40 passengers. He should endeavour to obtain a seating capacity up to the limit, or just below it, rather than just above it. The body space should be well filled with ,seats, but, when comfort is so important, it is better to sacrifice a seat than to reduce the leg or knee room of several seats. The majority of the seats must face forward. As an instance of the fascination it exerts, it is related that American railway passengers sometimes leave their seats in a Pullman car because they prefer the facing-forward seats of another coach. The drawback of the low-loading chassis is that it prevents this type of seat being used throughout, and four or more passengers, according to the position of the doorways, will have to be accommodated on long seats over the wheelarches. It is essential, therefore, that if any of the seats do not face forward every care should he taken to ensure that they laek nothing in comfort.

The bus having a seating capacity up to 20 passengers usually has a front'entrance with a mechanically' operated door opposite the end of the driver's seat. This door should reach to the outer edge of the step, and the chassis should be low enough so that the passenger may mount directly from this step to the floor. If the chassis be 2 ft. 2 ins:from the ground, then the top of the floor may be reckoned as being 3 ins, higher or 2 ft. 5 ins, from the ground. This measurement may then be divided into two steps, tile lower one being 1 .ft. 3 ins, and the upper one 1 ft. 2 iris.

• Although the mechanically operated door is flat and has not the curved turnunder of the side panels, yet it gives the front of the bus a neat appearance, especially if the step level be continued to form the bottom line of the body. As the door, when folded, must be accommodated on the step, the greater part .of the step has a comparatively wide and safe tread. The disadvantage of the extended or skirt panel is that It has an inside surface which is difficult to keep clean. A compromise is effected if the extra depth be restricted and the space to the step level be made up by means of one or two lifeguard battens. Or, if the locker space will be useful, then the panels may he • the full depth and a _full enclosure made.

If there are more than 20 seats the bus will often have a rear side entrance, because this design is more convenient for operation with a condukor. This position of entrance is by some considered safer than the front entrance, owing to its position with regard to the wheels; but, on the other hand, if the conductor he collecting fares at the forward end of the vehicle, he cannot prevent passengers attempting to mount or alight while the bus is in . motion. Many rear entrances are fitted with doors, but they are handoperated and shut at the edge of the landing or top step. It is suggested that the rear entrance should have the same kind of mechanically operated door as is provided for the front entrance, with the mechanism fastened to the. rear bulkhead. Occasionally the rear entrance may be at the extreme end of the bus, in which case the step may be exposed at the back end. It is a better plan, however, to enclose the step so that there is no extra incentive to. get on or off the rnoving vehicle, although the omission of the rounded hind

corner on one side detracts somewhat from the general appearance.

For the single-decker having 20 seats and upwards, front and hind entrances are often used. As the frontentrance bus cannot be used in the Metropolitan Police area except as a hackney carriage, the doubleentrance service bus is only to be found in the Provinces. It is an excellent design for use in a busy -area, because incoming and outgoing passengers do not obstruct one another, and the second doorway is, in effect, an emergency entrance which must be maintained in working, order, as it is always in use. The dofible entrance is most suitable for the larger type of single-decker, because then the two seats which are lost owing to the 'second entrance do not represent a high proportion of the total seating capacity.

Regarding the side elevation of the bus, there aie various arrangements from which a selection may

be made. One may have drop windows and a well cambered roof, or drop windows with hinged ventilating frames above them.

• These frames are a means of ventilation in bad weather, when it is inadvisable to lower the main windows, or they may be considered as windows which are more likely to have been left neglected. Metal frames shoula be used for these ventilating lights. A neat method of additional ventilation is the glass louvre inserted immediately under the roof line. This is particularly recommended, because it acts as a permanent ventilator, which is unlikely to cause unpleasant draughts. No modern single-decker is complete without one or more air extractors in

A distinctive and, many people thin k, quite attractive appearance is given to the single-decker if, instead of a plain roof, it be fitted with one of the clerestory pattern. With this form of construction the centre longitudinal portion of the roof is raised 7 ins. or 8 ins. above the sides. As the di fference in height at the sides and centre is as great as in a wellcambered roof, there is the same opportunity for keeping the side roof line low. A well-defined belt rail gives character to he side elevation. It looks best when the lower moulding can form a continuation of the hinge line of the bonnet. The shape and proportions of the radiator and bonnet control to a large extent the general design of the front of the body.