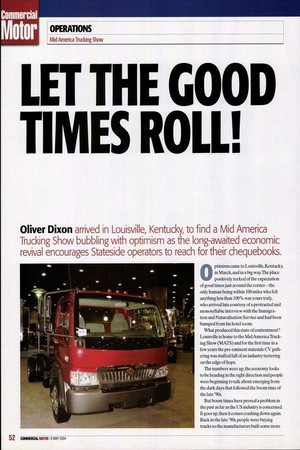 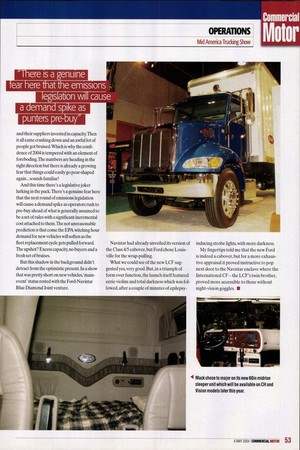 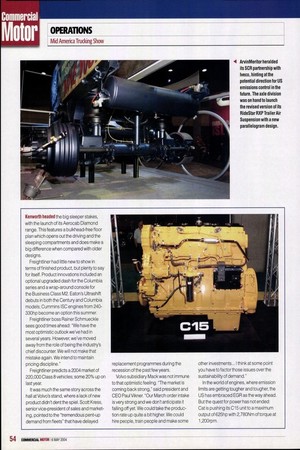 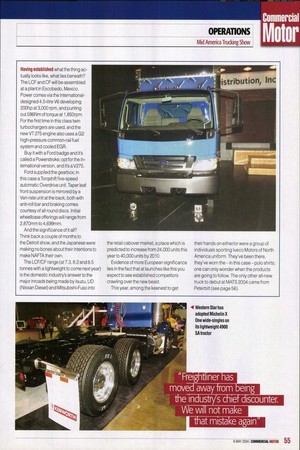 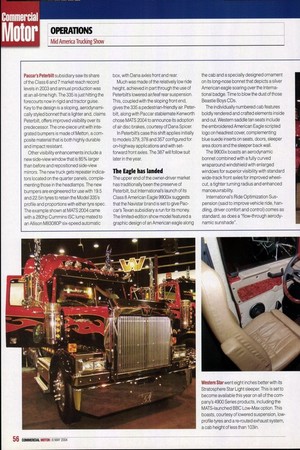 Page 52, 6th May 2004 — LET THE GOOD TIMES ROLL!
Close
Noticed an error?
If you've noticed an error in this article please click here to report it so we can fix it.

Oliver Dixon arrived in Louisville, Kentucky, to find a Mid America Trucking Show bubbling with optimism as the long-awaited economic

revival encourages Stateside operators to reach for their chequebooks.

Optimism came to Louisville, Kentucky, in March, and in a big way.The place positively reeked of the expectation of good times just around the corner—the only human being within 100 miles who felt anything less than 100% was yours truly, who arrived late courtesy of a protracted and monosyllabic interview with the Immigration and Naturalisation Service and had been bumped from his hotel room.

What produced this state of contentment? Louisville is home to the Mid America Trucking Show (MATS) and for the first time in a few years the pre-eminent stateside CV gathering was stuffed full of an industry teetering on the edge of hope.

The numbers were up, the economy looks to be heading in the right direction and people were beginning to talk about emerging from the dark days that followed the boom time of the late '90s. But boom times have proved a problem in the past as far as the US industry is concerned. It goes up, then it comes crashing down again. Back in the late '90s, people were buying trucks so the manufacturers built some more

and their suppliers invested in capacity.Then it all came crashing down and an awful lot of people got bruised.Which is why the confidence of 2004 is tempered with an element of foreboding. The numbers are heading in the right direction but there is already a growing fear that things could easily go pear-shaped again...sounds familiar!

And this time there's a legislative joker lurking in the pack. There's a genuine fear here that the next round of emissions legislation will cause a demand spike as operators rush to pre-buy ahead of what is generally assumed to be a set of rules with a significant incremental cost attached to them.The not unreasonable prediction is that come the EPA witching hour demand for new vehicles will soften as the fleet replacement cycle gets pulled forward. The upshot? Excess capacity, no buyers and a fresh set of bruises.

But this shadow in the background didn't detract from the optimistic present. In a show that was pretty short on new vehicles, 'mainevent' status rested with the Ford-Navistar Blue Diamond Joint venture.

Navistar had already unveiled its version of the Class 4/5 cabover, but Ford chose Louisville for the wrap-puffing. What we could see of the new LCF suggested yes, very good. But, in a triumph of form over function, the launch itself featured eerie violins and total darkness which was followed, after a couple of minutes of epilepsy

inducing strobe lights, with more darkness. My fingertips told me that the new Ford is indeed a cabover, but for a more exhaustive appraisal it proved instructive to pop next door to the Navistar enclave where the International CF — the LCF's twin brother, proved more accessible to those without night-vision goggles. •

Kenworth headed the big sleeper stakes, with the launch of its Aerocab Diamond range. This features a bulkhead-free floor plan which opens out the driving and the sleeping compartments and does make a big difference when compared with older designs.

Freightliner had little new to show in terms of finished product, but plenty to say for itself. Product innovations included an optional upgraded dash for the Columbia series and a wrap-around console for the Business Class M2. Eaton's Ultrashift debuts in both the Century and Columbia models; Cummins ISO engines from 240330hp become an option this summer.

Freightliner boss Rainer Schmueckle sees good times ahead: "We have the most optimistic outlook we've had in several years. However, we've moved away from the role of being the industry's chief discounter. We will not make that mistake again. We intend to maintain pricing discipline."

Freightliner predicts a 2004 market of 220,000 Class 8 vehicles; some 20% up on last year. It was much the same story across the hall at Volvo's stand, where a lack of new product didn't dent the spiel. Scott Kress, senior vice-president of sales and marketing, pointed to the "tremendous pent-up demand from fleets" that have delayed

replacement programmes during the recession of the past few years. Volvo subsidiary Mack was not immune to that optimistic feeling. "The market is coming back strong," said president and CEO Paul Vikner. "Our March order intake is very strong and we don't anticipate it falling off yet. We could take the production rate up quite a bit higher. We could hire people, train people and make some

other investments... I think at some point you have to factor those issues over the sustainability of demand."

In the world of engines, where emission limits are getting tougher and tougher, the US has embraced EGR as the way ahead. But the quest for power has not ended: Cat is pushing its 015 unit to a maximum output of 625hp with 2,780Nm of torque at 1,20Orpm.

Having established what the thing actually looks like, what lies beneath? The LCF and CF will be assembled at a plant in Escobedo, Mexico. Power comes via the Internationaldesigned 4.5-litre V6 developing 200hp at 3,000 rpm, and punting out 596Nm of torque at 1,850rpm. For the first time in this class twin turbochargers are used, and the new VT 275 engine also uses a 02 high-pressure common-rail fuel system and cooled EGR.

Buy it with a Ford badge and it's called a Powerstroke; opt for the International version, and it's a V275.

Ford supplied the gearbox; in this case a Torqshift five-speed automatic Overdrive unit. Taper leaf front suspension is mirrored by a Van-rate unit at the back, both with anti-roll bar and braking comes courtesy of all round discs. Initial wheelbase offerings will range from 2,870mm to 4,699mm.

And the significance of it all?

Think back a couple of months to the Detroit show, and the Japanese were making no bones about their intentions to make NAFTA their own. The LCF/CF range (at 7.3, 8.2 and 8.5 tonnes with a lightweight to come next year) is the domestic industry's answer to the major inroads being made by lsuzu, UD (Nissan Diesel) and Mitsubishi-Fuso into

Evidence of more European significance lies in the fact that at launches like this you expect to see established competitors crawling over the new beast. This year, among the keenest to get

their hands on either/or were a group of individuals sporting Iveco Motors of North America uniform. They've been there, they've worn the in this case polo shirts; one can only wonder when the products are going to follow. The only other all-new truck to debut at MATS 2004 came from Peterbilt (see page 56).

Paccar's Peterbilt subsidiary saw its share of the Class 6 and 7 market reach record levels in 2003 and annual production was at an all-time high. The 335 is just hitting the forecourts now in rigid and tractor guise. Key to the design is a sloping, aerodynamically styled bonnet that is lighter and, claims Peterbilt, offers improved visibility over its predecessor. The one-piece unit with integrated bumpers is made of Metton, a composite material that is both highly durable and impact resistant. Other visibility enhancements include a new side-view window that is 85% larger than before and repositioned side-view mirrors. The new truck gets repeater indicators located on the quarter panels, complementing those in the headlamps. The new bumpers are engineered for use with 19.5 and 22.51n tyres to retain the Model 335's profile and proportions with either tyre spec. The example shown at MATS 2004 came with a 280hp Cummins ISC lump mated to an Allison M83080P six-speed automatic

Much was made of the relatively low ride height, achieved in part through the use of Peterbilt's lowered air/leaf rear suspension. This, coupled with the sloping front end, gives the 335 a pedestrian-friendly air. Peterbilt, along with Paccar stablemate Kenworth chose MATS 2004 to announce its adoption of air disc brakes, courtesy of Dana Spicer.

In Peterbilt's case this shift applies initially to models 379, 378 and 357 configured for on-highway applications and with setforward front axles. The 387 will follow suit later in the year. The Eagle has landed The upper end of the owner-driver market has traditionally been the preserve of Peterbilt, but International's launch of its Class 8 American Eagle 9900ix suggests that the Navistar brand is set to give Paccar's Texan subsidiary a run for its money. The limited-edition show model featured a graphic design of an American eagle along

the cab and a specially designed ornament on its long-nose bonnet that depicts a silver American eagle soaring over the International badge. Time to blow the dust of those Beastie Boys CDs.