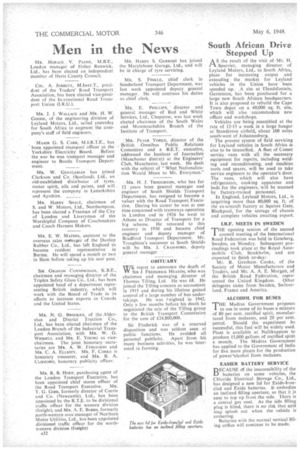 Page 6, 6th May 1949 — Men in the News
Close
Noticed an error?
If you've noticed an error in this article please click here to report it so we can fix it.
Keywords : Business / Finance

London manager of Fisher Renwick, Ltd., has been elected an independent member of Herts County Council.

MR. J. I. WALLACE and •MR. H. W. GooDE, of the engineering division of Leyland Motors, Ltd., sailed yesterday for South Africa to augment the company's staff of field engineers.

• MAJOR G. S. CARR, R.TE., has been appointed transport officer to the

Yorkshire Electricity Board. Before the war he was transport manager and engineer to Bootle Transport Depart

ment. _ MR. W. GENTLEMAN has joined Clarkson and Co. (Scotland), Ltd., an old-established diStabutor of tyres, motor spirit, oils and paints, and will represent the company in Lanarkshire and Ayrshire.

S. and W. Motors, Ltd., Northampton, has been elected a Freeman of the City of London and Liveryman of the Worshipful Company of Coachmakers and Coach Harness Makers.

MR. E. W. MATtits, assistant to the overseas sales manager of the Dunlop Rubber Co., Ltd., has left England to become resident representative in' Burma. He will spend a month or. two in Siam before taking up his.neWpast.

SIR GRAHAM • CUNNINGHAM, K.B.E.. chairman and managing director of the Triplex Safety Glass Co., Ltd., has been appointed head of a department representing British industry, which will work with the Board of Trade in its efforts to increase exports to Canada

and the United States. •

MR. N. G. •BRooREs, tat the Alder shot and District Traction Co„ Ltd., has been elected chairman of the London Branch of the Industrial Transport Association. with MR. W. G. WtmELL and MR. E. YOUNG as vicechairmen. The joint honorary secretaries are MR. A. W. FERGUSON and MR. C. A. ELLIOTT. M. R CORK E is honorary treasurer, and MR. B. A. CLIFFORD, honorary publicity officer.

T. G. GIBB, formerly director of Currie and Co. (Newcastle), Ltd., has been appointed by the R.T.E. to be divisional traffic officer for the western division (freight), and MR. A. E BARBS, formerly north-western area manager of Northern Motor Utilities, Ltd. has been appointed divisional traffic officer for the northv..-tern division (freight)

MR. HARRY S. GERRISII has joined the Marylebone Garage, Ltd., and will be in charge of tyre servicing.

Ma. E. PHILIJPS, director and general manager of Red and White Services, Ltd., Chepstow, was last week elected chairman • of the South Wales and Monmouthshire Branch of the

:MR. PEI ER YORKE, director of the British Omnibus Public ..Relations Committee and a B.E.T. executive, 'addressed the Institute of Journalists (Manchester district) at the Engineers' Club, Manchester, last week. He dealt with the subject of "What Nationalization Would Mean to Mr. Everyman."

:MR. • H. .1.. TROUGHTON, who has for 12 years been general manager and engineer of South Shields Transport Department, has resigned to become a valuer with the Road Transport Executive. During his career he was at one time concerned with tramways operation in London and in 1926 he went to Athens as Director of Transport for a big scheme. He returned to this country in 1930 and became chief engineer and deputy manager of Bradford Transport Department. Mr. Troughton's successor at South Shields will he M. J. CRAW FORD, deputy