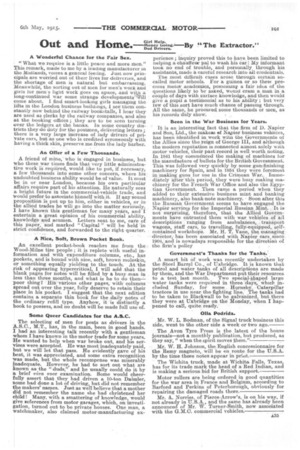 Page 11, 6th May 1915 — Out and Home.
Close
Noticed an error?
If you've noticed an error in this article please click here to report it so we can fix it.
Keywords : Tracked Vehicles, Tanks Of The Interwar Period, Wichita, Kansas, Tank

A Wonderful Chance for the Fair Sex.

"What we require is a little peace and more. men." This remark, made to me by a leading manufacturer in the Midlands, voices a general feeling. just now principals are worried out of their lives for deliveries, and the shortage of men is natural but embarrassing. Meanwhile, the sorting out of men for men's work and girls for mehs light work goes on apace, and wit4 long-continued war some strange developmentewill come about. I find smart-looking girls managing the lifts in the London business buildingsel see them constantly now behind the railway bookstalls, I hear they are used as _clerks by the railway companies, and also at the booking offices ; they are to be seen turning over the ledgers at the banks. In some country districts they do duty for the postmen, delivering letters ; there is a very .large increase of lady drivers of private cars, but as one who is -credited erroneously with having a thick skin, preserve me from the lady barber.

An Offer of a Few Thousands.

A friend of mine, who is engaged in business, but -who these war times finds that very little administrative work is required, would like to put, if necessary, a few thousands into some other concern, where his undoubted business ability would be of value. It must be in or near London, because his own particular affairs require part of his attention. He naturally sees a bright future in the commercial-vehicle trade, and would prefer to associate himself with it. if any sound proposition is put up to him, either in vehicles, or in the allied trades he will go into the matter seriously.

have :known this gentleman for many years, and I entertain a great opinion of his commercial ability, knowledge and acumen. Letters sent to me, care of this paper, and marked "Capital " will be held in strict confidence, and forwarded to the right quarter.

An excellent pocket-book reaches me from the Wood-Milne tire people ; it is replete with useful information and with expenditure columns, etc., has pockets, and is bound with nice, soft, brown moleskin, or something equally yielding to the touch. At the risk of appearing hypercritical, I will add that the blank pages for notes will be filled by a busy .man in less than three months, and what is he to do then— poor thing t His various other pages, with columns spread out over the year, fully deserve to retain their place in his pocket. I suggest that the next edition contains a separate thin book for the daily notes of the ordinary refill type. Anyhow, it is distinctly a, book to possess, and no doubt will be made full use of.

Some Queer Candidates for the A.S.C.

The selecting of men for posts as drivers in the A.S.C., M.T. has, in the main, been in good hands. I had an interesting talk recently with a gentleman whom I have known in the motor trade for some years. He wanted to help when war broke out, and his services were accepted. He was most inadequately paid, but we will let that pass. He evidently gave of his best, it was appreciated, and some extra recognition was made, but the whole recompense was miserably inadequate. However, he had to sort out what are known as. the "duds," and he usually could do it by a brief viva voce examination. Some would cheerfully assert that they had driven a 10-ton Daimler, Some had done a lot of driving, but did not remember the makers' names. Just as well believe that a mother did not remember the name she had christened her child! Many, with a smattering of knowledge, would give ileferences from motor garage; which, on investigation, turned out to be private houses. One man, a watchmaker, also claimed motor-manufacturing ex perience ; inquiry proved this to haye, been limited to nelping a chauffeue pal to wash his car I My informant took no end of trouble, and personally. through his assistants, made a careful research into all credentials.

The most difficult cases arose through certain socalled motor schools. For a guinea or so thesf precious motor academie; possessing a fair idea of the questions lileely to be asked, weuict cram a man in a couple of days with surface knowledge, and then would give a pupil a testimonial as to his ability ; but very new of this sort have much chance of passing through. All the same, he procured some thousands or men, as his records duly show.

Been in the War Business for Years, It is an interesting fact that the ,firm of D. Napier and Bon, Ltd., the makems Naeoier business vehicles, has been identified in work with the Governments of the Allies since the reign of George III, and although the modern repulation is connected almost solely with motor vehicle; their past record is well worth noting. In 1841 they commenced the making of machines for the manufacture of bullets for the British Government. This was followed very quickly by some gunsfinishing machinery for Spain, and in 1854 they were foremost in)iaaking guns for use in the Crimean War. Imme diately after. this period, they were busy making machinery for the French War Office and also the Egyptian Government. Then came a period when. they added to their extensive business mint and banking machinery, also bank-note machinery. Soon after this the Russian Government seems to have .engaged the Napier servicas for the Imperial Russian Mint..-•It is not surprising, 'therefore, that the Allied Governments have entrusted them with war vehiclesof ail descriptions ranging from ambulanees,tranipOrt wagons staff cars, to travelling, fully-equipped, selfcontained workshops. Mr. H. T. Vane, the managing director, has been associated with Napier cars since 1904, and is nowadays responsible for the direction of the firm's policy Government's Thanks for the Tanks.

A smart bit of work was recently undertaken by the Steel Barrel Co., of Uxbridge. It is known that petrol and water tanks of all descriptions are made by them, and the War Department put their resources to a test last month. Two special-Oaped large water tanks were required iii three days., which included Sunday, for some Hornsby. Caterpillar tractors in use near the fighting line. The tanks had to be taken to BlackwalI to be galvanized. but there they were at Uxbridge on the Monday, when I happened to call, quite ready.

Mr. W. L. Badman, of the Signal truck business this side, went to the other -side a week or two ago.

The Avon Tyre Press is the latest of the house journals—not a monthly publication, but produced, as they say," when the spirit moves :them." Mr. W. 11. Johnson, the English concessionnaire for the Remy magneto, will be en route for the by the time these notes appear in print. The Wichita truck, made at Wichita, Falls, Texas, has for its trade mark the head of a Red Indian, and is making a. serious-bid for British support.

Motor rollers are being ordered in goad quantities for the war area in France and Belgium, according to Barford and Perkins of Peterborough, obviously for repairing the damaged roads there. Mr. A. Norriss, of Pierce-Arrow's, is on his way, if not already in U.S.A., and the same has already been announced of Mr, W. Turner-Smith, now associated with the G.M.O. commercial vehicles.