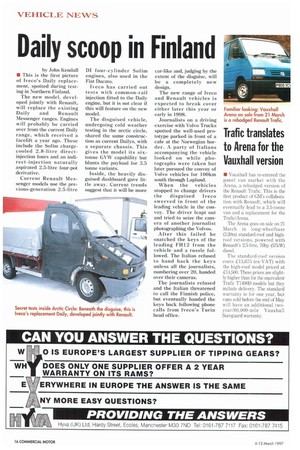 by John Kendall • This is the first picture of Iveco's Daily replacement, spotted during testing in Northern Finland.

The new model, developed jointly with Renault, will replace the existing Daily and Renault Messenger ranges. Engines will probably be carried over from the current Daily range, which received a facelift a year ago. These include the Sofim chargecooled 2.8-litre directinjection fours and an indirect-injection naturally aspirated 2.5-litre four-pot derivative.

Iveco has carried out tests with common-rail injection fitted to the Daily engine, but it is not clear if this will feature on the new model.

The disguised vehicle, undergoing cold weather testing in the arctic circle, shared the same construction as current Dailys, with a separate chassis. This gives the model its sixtonne GVW capability but blunts the payload for 33 tonne variants.

Inside, the heavily disguised dashboard gave little away. Current trends suggest that it will be more car-like and, judging by the extent of the disguise, will be a completely new design.

The new range of Iveco and Renault vehicles is expected to break cover either later this year or early in 1998.

Journalists on a driving exercise with Volvo Trucks spotted the well-used prototype parked in front of a cafe at the Norwegian border. A party of Italians accompanying the vehicle looked on while photographs were taken but later pursued the convoy of Volvo vehicles for 100km south through Lapland.

When the vehicles stopped to change drivers the disguised Iveco swerved in front of the leading vehicle in the convoy. The driver leapt out and tried to seize the camera of another journalist photographing the Volvos.

After this failed he snatched the keys of the leading FH12 from the vehicle and a tussle followed. The Italian refused to hand back the keys unless all the journalists, numbering over 20, handed over their cameras.

The journalists refused and the Italian threatened to call the Finnish police, but eventually handed the keys back following phone calls from Iveco's Turin head office.