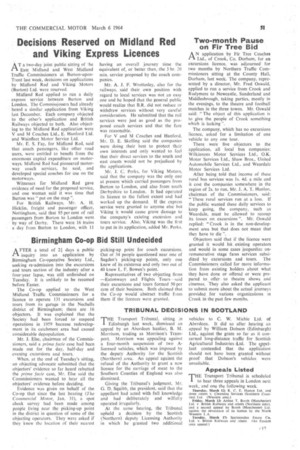 Edinburgh last week, dismissed an appeal by an Aberdeen haulier, B. M. Morrison, trading as Morrison's Transport. Morrison was appealing against a four-month suspension of two Alicensed vehicles, which was imposed by the deputy Authority for the Scottish (Northern) area. An appeal against the refusal of the Authority to grant a new licence for the carriage of meat to the Southern Counties of England was also dismissed.

Giving the Tribunal's judgment, Mr. G. D. Squibb, the president, said that the appellant had acted with. full knowledge and had deliberately and wilfully operated irregularly.

At the same hearing, the Tribunal upheld a decision by . the Scottish (Northern) deputy Licensing Authority in which he granted two additional

vehicles to C. W. Michie Ltd. of ,Abcrdeen. It did so after hearing an appeal by William Dobson (Edinburgh) Ltd., againstthe grant so far as it concerned long-distance traffic for Scottish Agricultural Industries Ltd. The aippelJant contended that the application should not have been granted .without proof • that Dobson's vehicles were unsuitable.