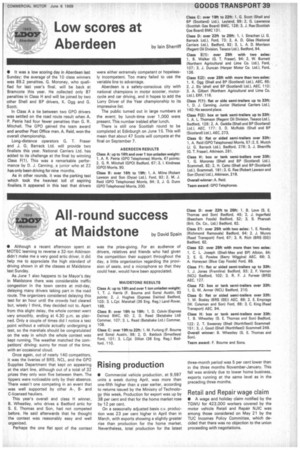 at Maidstone by David Spain

• Although a recent afternoon spent at MOTEC learning to reverse a 32-ton Atkinson didn't make me a very good artic driver, it did help me to appreciate the high standard of driving shown in all the classes at Maidstone last Sunday.

As June 1 also happens to be Mayor's day in Maidstone there was considerable traffic congestion in the town centre at mid-day, delaying many drivers taking part in the road route. The organizers considered delaying this test for an hour until the crowds had cleared but, wisely I think, they decided not to. Apart from this slight delay, the whole contest went very smoothly, ending at 4.30 p.m. as plan ned. Only a couple of times did I notice a test point without a vehicle actually undergoing a test, so the marshals should be congratulated on the way in which the whole contest was kept running. The weather matched the competitors' driving: sunny for most of the time, with an occasional cloud.

Once again, out of nearly 140 competitors. it was the liveries of BRS. NCL, and the GPO Supplies Department that kept on appearing at the start line, although out of a total of 32 prizes they only won five between them. The tippers were noticeable only by their absence. There wasn't one competing in an event that was well supported by other A-, Band C-licensed hauliers.

This year's overall and class H winner, B. Wheatley, who drives a Bedford artic for S. E. Thomas and Son, had not competed before. He said afterwards that he thought the contest was reasonably easy and well organized.

Perhaps the one flat spot of the contest was the prize-giving. For an audience of drivers, relatives and friends who had given the competition their support throughout the day, a little organization regarding the provision of seats, and a microphone so that they could hear, would have been appreciated.