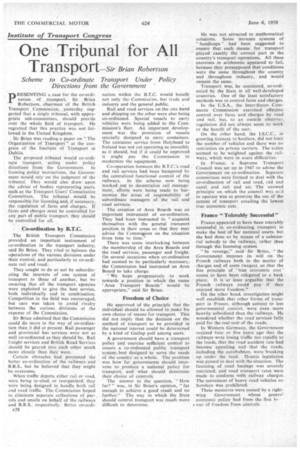 One Tribunal for All

Schetne to Co-ordinate Transport Under Policy Directions from the Government

pRESENTING a case for the co-ordination of transport, Sir . Brian Robertson, chairman of the British Transport Commission, yesterday suggested that a single tribunal, with appropriate sub-committees, should preside over the -whole field of transport. He regretted that this practice was not followed in the United Kingdom.

Sir Brian was reading a paper on "The Organization of Transport" at the congress of the Institute of Transport in Dublin.

The proposed tribunal would co-ordinate transport, acting under policy directions from the Government. In framing Policy instructions, the Government would rely on the judgment of the tribunal. They would also draw. upon the advice of bodies representing users, such as the Transport Users' Consultative Committees. The tribunal would be responsible for licensing and, if necessary, the regulation of fares and charges.. If fares arid charges must be controlled for any part of public transport, they should be controlled for all

The British Transport Commission provided an important instrument of co-ordination in the transport industry, said Sir Brian. They tried to balance the oPerations of the various divisions under their control, and particularly to co-ordinate rail and road.

They sought to do so not by subordinating the interests of one system of transport to those of another, but by ensuring that all the transport agencies were exploited to give the best service, both individually and in combination. Competition in the field was encouraged, but care was taken to avoid rivalry between the various divisions at the expense of the Commission.

Sir Brian admitted that the Commission could do more in the way of co-ordination than it did at present. Rail passenger and provincial bus services were not as well co-ordinated as they should be. Rail freight. services and British Road Services should be geared into each other much more closely than they were.

Certain obstacles had prevented the better co-ordination of the railways and B.R.S., but he believed that they might be overcome.

When traffic depots, either rail or road, were being re-sited, or reorganized. they were being designed to handle both rail and road traffic. The Commission hoped to eliminate separate collections of parcels and smalls on behalf of the railways and B.R.S., respectively. Better co-ordi E28 nation within the B.T.C. would benefit not only the Commission, but trade and industry and the general public.

Rail and road services on the one hand and shipping on the other were also being co-ordinated. Special vessels to carry vehicles were being added to the Commission's fleet. An important development was the provision of vessels specially designed to carry containers. The 'container service from Holyhead to Ireland Was not yet operating as smoothly as it should, but if it could be improved it might pay the Commission to modernize the equipment.

Co-operation between the B.T.C,'s road and rail services had been hampered by the centralized functional contred of the railways. In the scheme now being worked out to decentralize rail management, efforts were being made to harmonize the areas of responsibility of subordinate managers of the rail and road services.

The creation of Area Boards was an important instrument of co-ordination. They had been instructed to "acquaint themselves with the general transport position in their areasso that they may•advise the Gornmi§sion on the situation from time to time."

• There was some interlocking between the membership of the Area Boards and the road services, passenger and freight. On several occasions when co-ordination had seemed to be particularly necessary, the Commission had instructed an Area Board to take charge.

" We hope progressively to work towards a position in which the name Area Transport Boards' would be appropriate," said Sir Brian.

He approved of the principle that the individual should be allowed to make his own choice of means for transport. This did not imply that the decision on the method of transport to be provided in the national interest could he determined by a kind of Gallup poll among users.

A government should have a transport policy and exercise sufficient control to ensure a co-ordinated public transport system. best designed to serve the needs of the country as a.whole. The problem was how far governments should intervene to produce a national policy for transport, and what should determine their choice Of controls.

The answer to the question, " How far? " was, in Sir Brian's opinion, "tar enough to achieve a good result and no further." The way in which the State should control transport was much more difficult to determine. He was not attracted to mathematical solutions. Some intricate systems of " handicaps " had been suggested to ensure that each means for transport played exactly the correct part in the country's transport operations. All these exercises in arithmetic appeared to fail, because they presupposed that conditions were the same throughout the country and throughout industry, and would remain the same.

Transport was, he continued, co-ordinated by the State in all well-developed countries. One of the least satisfactory methods was to control fares and charges.

In the U.S.A., the Inter-States Commerce Commission exercised effective control over fares and charges by road and rail, but, to an outside observer,. regulation did not always seem to work to the benefit of the user.

On the other hand. the I.S.C.C., in granting licences to hauliers, did not limit the number of 'vehicles and there was no restriction on private carriers. The scales seemed to he weighted against the railways, which were in acute difficulties.

In France, a SuPrente Transport Council was set up in 1947 to advise the Government on co-ordination. Separate committees were formed to deal with the co-ordination of rail and road, rail and canal and rail and air. The avowed principle on which the council was sad to operate was to promote the use of the System of transport entailing the lowest true economic cost.

France appeared to have been tolerably successful in co-ordinating transport to make the best of her national assets, but she had done so by means of a substantial subsidy to the railways, rather than through the licensing system.

"In revenge," said Sir 'Brian, "the Government imposes its will on the • French railways both in the matter of charges and of costs (wages), so that the fine principle of true economic cost' seems to have been relegated to a back place. It is at least arguable that the Frenchrailways could pay if they enjoyed more freedom.".

On the other hand, investigation might well establish that other forms. of transport in France, although subject to less governmental control, were even more heavily subsidized than the railways. He wondered whether the road services fully paid for the real cost of the roads.

'In Western Germany, the Government realized foUr or five Years ago that the railways were losing traffic too rapidly to the roads, that the road accident rate had become appalling and that the roads, including the autobahnen, were breaking up under the load. Drastic legislation was passed to deal with the situation. The licensing of road haulage was .severely restricted, and road transport rates were Made to conform with railway charges. The movement of heavy road vehicles on Sundays Was prohibited.

These measures were Passed by a rightwing Government whose general economic policy had from the first be 11 one of freedom from controls.