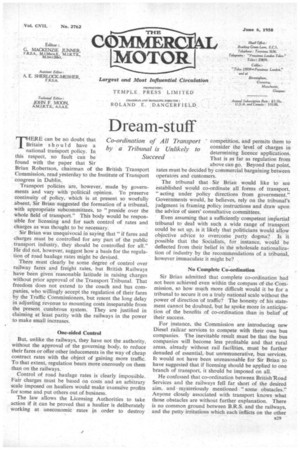 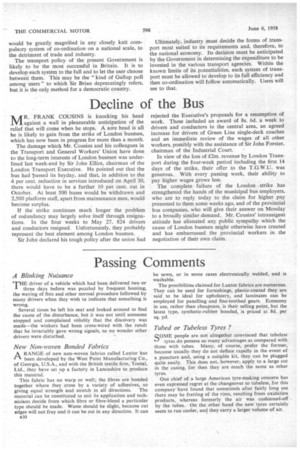 THERE can be no doubt that Britain should have a national trarisport policy. In this respect, no fault can be found with the paper that Sir Brian Robertson, chairman of the British Transport Commission, read yesterday to the Institute of Transport congress in Dublin.

Transport policies are, however, made by governments and vary with political opinion. To preserve continuity of policy, which is at present so woefully absent, Sir Brian suggested the formation of a tribunal, with appropriate subcommittees, to "preside over the whole field of transport." .This body would be responsible for licensing and for such control of rates and charges as was thought to be necessary.

Sir Brian was unequivocal in saying that "if fares and charges must be controlled for any part of the public transport industry, they should be controlled for all." He did not, however, suggest how a basis for the regulation of road haulage rates might be devised.

There must clearly be some degree of control over railway fares and freight rates, but British Railways have been givenreasonable latitude in raising charges without prior approval of the Transport Tribunal. That freedom does not extend to the coach and bus companies, who willingly accept the regulation of their fares by the Traffic Commissioners, but resent the long delay in adjusting revenue to mounting costs inseparable from the present cumbrous system. They are justified in claiming at least parity with the railways in the power to make small increases.

One-sided Control But, unlike the railways, they have not the authority, without the approval of the governing body, to reduce their fares or offer other inducements in the way of cheap contract rates with the object of gaining more traffic. To that extent, regulation bears more onerously on them than on the railways.

Control of road haulage rates is clearly impossible. Fair charges must be based on costs and an arbitrary scale imposed on hauliers would make excessive profits for some and put others out of business.

The law allows the Licensing Authorities to take action if it can be proved that a haulier is deliberately working at uneconomic rates in order to destroy competition, and permits them to consider the level of charges in determining licence applications. That is as far as regulation from above can go. Beyond that point, rates must be decided by commercial bargaining between operators and customers.

The tribunal that Sir Brian would like to see established would co-ordinate all forms of transport, "acting under policy directions from government." Governments would, he believes, rely on the tribunal's judgment in framing policy, instructions and draw upon the advice of Users' consultative committees.

Even assuming that a sufficiently competent impartial tribunal to deal with such a wide range of transport could be set up, is it likely that politicians would allow o.bjective advice to overcome party dogma? Is it possible that the Socialists, for instance, would be deflected from their belief in the wholesale nationalization of industry by the recommendations of a tribunal, however immaculate it might be?

No Complete Co-ordination Sir Brian admitted that complete co-ordination had not been achieved even within the compass of the Com:. mission, so how much more difficult would it be for a tribunal to secure it on a truly national scale without the power of direction of traffic? The honesty of his statement cannot be doubted, but he spoke more in anticipation of the benefits of co-ordination than in belief of their success.

For instance, the Commission are introducing new Diesel railcar services to compete with their own bus companies. =The inevitable result must be that the bus companies will become less profitable and that rural areas, already without rail facilities, must be further denuded of essential, but unremunerative, bus services. It would not have been unreasonable for Sir Brian to have suggested that if licensing should be applied to one branch of transport, it should be imposed on all.

He confessed that co-ordination between BritishRoad Services and the railways fell far short of the desired aim, and• mysteriously mentioned "some obstacles." Anyone closely associated with transport knows what those obstacles are without further explanation. There is no common ground between B.R.S. and the railways, and the petty irritations which each inflicts on the other would be greatly magnified in any closely knit compulsory system of co-ordination on a national scale, to the detriment of trade and industry.

The transport policy of the present Government is likely to be the most successful in Britain. It is to develop each system to the full and to let the user choose between them. This may be the "kind of Gallup poll among users" to which Sir Brian deprecatingly refers, but it is the only method for a democratic country. Ultimately, industry must decide the forms of transport most suited to its requirements and, therefore, to the national economy. Its decision must be anticipated by the Government in determining the expenditure to be invested in the various transport agencies. Within the known limits of its potentialities, each system of transport must be allowed to develop to its full efficiency and then co-ordination will follow automatically. Users will see to that.