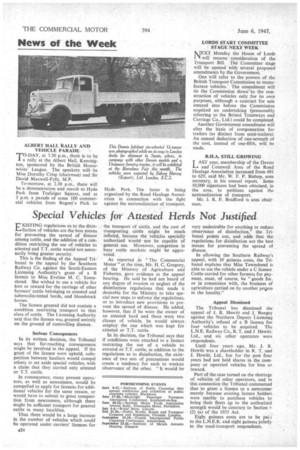 Page 26, 6th June 1947 — Special Vehicles for Attested Herds Not Justified
Close
Noticed an error?
If you've noticed an error in this article please click here to report it so we can fix it.
Keywords : Law / Crime

XIST1NG regulations as to the disin1-Jfection of vehicles are the best means for 'preventing the spread of disease among cattle, and the addition of a condition restricting the use of vehicles to attested and T.T. cattle would not necessarily bring greater security.

This is the finding of the Appeal Tribunal in the appeal by the Southern Railway Co. against the South-Eastern Licensing Authority's grant of a B licence to Miss Eveline M. C. Townshend. ' She wished to use a vehicle for hire or reward for the carriage of other farmers' cattle belonging to attested and tuberculin-tested herds, and bloodstock horses.'

The licence granted did not contain a condition restricting transport to that class of cattle. The Licensing Authority said that the licence was granted entirely on the ground of controlling disease.

In its written decision, the Tribunal says that far-reaching consequences might be involved in the appeal. If the grant of the licence were upheld, coinpetition between hauliers would compel others to set aside special vehicles, with a claim that they carried only attested or T.T. cattle.

In consequence, many present operators, as well as newcomers, would be compelled to apply for licences for additional vehicles for the same reason, or would have to submit to great competition from newcomers, although there Might be sufficient transport for general cattle in many localities.

Thus there Would be a large increase in the number of vehicles which could be operated under carriers' licences for the transport of cattle, and the cost of transporting cattle might be much inflated, because the vehicles specially authorized would not be capable of general use. Moreover, congestion in busy cattle markets might be aggravated. .

As reported in "The Commercial Motor" at the time, Mr. H. C. Gregory, of the Ministry of Agriculture arid Fisheries, gave evidence at the appeal hearing. He said he had not heard of any degree of evasion or neglect of the disinfection regulations that made it desirable for the Ministry to take special new steps to enforce the regulations, or to introduce new provisions to prevent the spread of disease. He added. however, that if he were the owner of an attested herd and there were two classes of vehicle, he would always employ the one which was kept for attested or T.T. cattle.

In its decision, the Tribunal says that if conditions were attached to a licence restricting the use of a vehicle to attested or T,T, cattle, in addition to the regulations as to disinfection, the existence of two sets of precautions would create a tendency for each to weaken observance of the other. "It would be very undesirable for anything to reduce observance of disinfection," the Tribunal points out, and adds that the regulations for disinfection are the best means for preventing the spread of disease.

In allowing the Southern Railway's appeal, with 10 guineas costs, the Tribunal explains that Miss Townshend is able to use the vehicle under a C licence Cattle carried for other farmers for payment, must, of course, be "goods for, or in connection with, the business of agriculture carried on by another perkon in the locality."

Appeal Dismissed The Tribunal has dismissed the appeal of J. R. Hewitt and J. Boagey against the Northern Deputy Licensing Authority's refusal of a B licence for four vehicles to be acquired. The L.N.E. Railway Co, R. T. and I Hewitt, Ltd., and six other operators were respondents.

Until four years ago, Mr. J. R Hewitt was a shareholder in R. T. and J. Hewitt, Ltd., but for the past four years had not held shares in the company or operated vehicles for hire or reward.

Part of the case turned on the shortage of vehicles of other operators, and in this connection the Tribunal commented that to grant a licence to a newcomer merely because existing licence holders were unable to purchase vehicles to bring their, fleets up to the authorized strength would be contrary to Section 6 (2) (a) of the 1933 Act.

Eight guineas costs are to be pai-J to the L.N.E.R. and eight guineas jointly to the road-transport respondents.