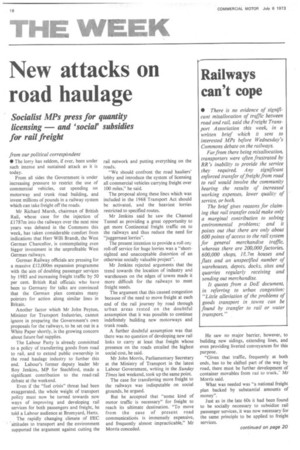 Page 20, 6th July 1973 — Railways can't cope
Close
Noticed an error?
If you've noticed an error in this article please click here to report it so we can fix it.

• There is no evidence of significant misallocation of traffic between road and rail, said the Freight Transport Association this week, in a written brief which it sent to interested MPs before Wednesday's Commons debate on the railways.

Far from there being misallocation, transporters were often frustrated by BR's inability to provide the service they required Any significant enforced transfer of freight from road to rail would involve the community bearing the results of increased working expenses, lower quality of service, or both.

The brief gives reasons for claiming that rail transfer could make only a marginal contribution to solving environmental problems; and it points out that there are only about 600 points of access to the rail system for general merchandise traffic, whereas there are 200,000 factories, 600,000 shops, I8.7m houses and flats and an unspecified number of warehouses, depots, docks, sites and quarries regularly receiving and sending out merchandise.

It quotes from a DoE document, in referring to urban congestion: "Little alleviation of the problems of goods transport in towns can be found by transfer to rail or water transport."