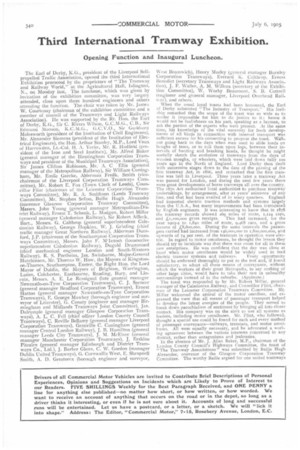 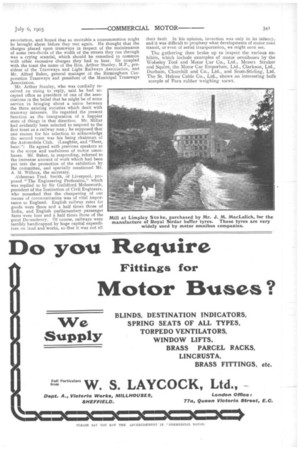 When the usual loyal toasts had been honoured, the Earl of Derby submitted The Industry of Transport.His lord ship remarked that the scope of the toast was so wide as to render it impossible for him to do justice to it ; hence it would not he foolishness on his part, speaking as a layman, to ask the pardon of the experts who were present. At the same time, his knowledge of the vital necessity for fresh developments of all kinds in connection with internal transport was sufficient excuse for his consenting to propose the toast. Wifh. out going back to the days when men used to slide loads on boughs of trees, or to roll them upon logs, between their intervals of hunting and breaking heads, he thought he might usefully sketch the evolution of tramways from the days of wooden troughs, or wheelers, which were laid down fully ion years ago in the North of England. Lord Derby then dealt with successive stages down to the date of the passing of the first tramway Act, in 1866, and remarked that the first tramline was laid in Liverpool. Three years later a tramway Act was passed for London, and during the next few years there were great developments of horse tramways all over the country. The 187o Act authorised local authorities to purchase tramway undertakings, by arrangement, after 21 years' existence of any line, and that had been availed of in many quarters. England had imported electric traction methods and systems largely from the U.S.A., but many improvements had been introduced by English engineers. It was interesting to know that in x878 the tramway records showed 269 miles of route, /424 cars, and 41,Too,000 gross receipts. This had increased, for the year 1903-4 to 5,840 miles of route, 9,468 cars, and a gross income of £8,600,000. During the same intervals the passengers carried had increased from 146,000,000 to x,800,000,000, and upwards of 74 per cent, of the tramcars in operation were electric. In regard to motor omnibuses, he thought the lesson they should try to inculcate was that there was room for all in these new enterprises. He was confident that the day was close at hand when motor omnibuses would be widely used to feed electric tramcar systems and railways. Every opportunity should be embraced thoroughly to put to the test and, if found satisfactory, to adopt all these means of conveyance, without which the workers of their great Metropolis, to say nothing of other large cities, would have to take their rest in unhealthy surroundings instead of in the suburbs. (Applause.) The toast was responded to by Mr. Robert Millar, general manager of the Caledanian.Railway, and Councillor Flint, chairman of the Leicester Corporation 'I'ramways Committee. Mr. Millar welcomed the arrival of the motor omnibus, and expressed the view that all means of passenger transport helped to develop the latent energies of the people. They served to break down parochialism of sentiment by bringing all into closer contact. His company was on the alert to use all systems as feeders, including motor omnibuses. Mr. Flint, who followed, thought a special use could be found for each and every method of passenger conveyance—railways, tramcars, and motor omnibuses. All were equally necessary, and he advocated a working agreement between the various interests concerned in any district, rather than antagonisms and jealousies. .

In the absence of Mr. J. Allen Baker, M.P., chairman of the London County Council's Highways Committee, the toast of "The Tramway Associations" was submitted by Bailie Hugh Alexander, convener of the Glasgow Corporation Tramway Committee. The worthy Bailie argued for one united tramways asiociation, and hoped that so desirable a consummation might be brought about before they met again. He thought that the charges placed upon tramways in respect of the maintenance of some two-thirds of the width of the streets they ran through was a crying scandal, which should be remedied in common with other excessive charges they had to bear. He coupled with the toast the name of the Hon. Arthur Stanley, M.P., president of the Tramways and Light Railways Association, and Mr. Alfred Baker, general manager of the Birmingham Corporation Tramways and president of the Municipal Tramways Association.

Mr. Arthur Stanley, who was cordially received on rising to reply, said he had accepted office as president of one of the associations in the belief that he might be of some service in bringing about a union between the three existing societies which dealt with tramway interests. He regarded the present function as the inauguration of a happier state of things in that direction. Mr. Millar had evidently been selected to respond to the first toast as a railway man ; he supposed that one reason for his selection to acknowledge the second toast was his being chairman of the Automobile Club. (Laughter, and "Hear, hear.") He agreed with previous speakers as to the scope and usefulness of motor omnibuses. Mr. Baker, in responding, referred to the immense amount of work which had been put into the promotion of the exhibition by the committee, and specially mentioned Mr. A. hi. Willcox, the secretary.

Alderman Fred. Smith, of Liverpool, proposed "The Engineering Profession," which was replied to by Sir Guildford Molesworth, president of the Institution of Civil Engineers, who remarked that the cheapening of our means of communication was of vital importance to England. English railway rates for goods were three and a half times those of India, and English parliamentary passenger fares were four and a half times those of the great Denendency. Of course, railways were terribly handicapped by huge capital expenditure on land and works, so that it was not all their fault. In his opinion, invention was only in its infancy, and it was difficult to prophesy what developments of motor road transit, or even of aerial transportation, we might soon see.

The gathering then broke up to inspect the various exhibits, which include examples of motor omnibuses by the Wolseley Tool and Motor Car Co., Ltd., Messrs Straker and Squire, the Motor Car Emporium, Ltd., Clarkson, Ltd., Durham, Churchill and Co., Ltd., and Scott-Stirling, Ltd. The Sr. Helens Cable Co., Ltd., shows an interesting bulk sample of Para rubber weighing iocwt.