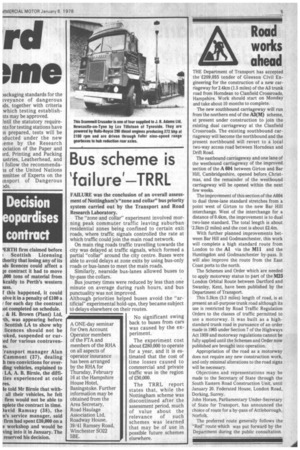 Page 7, 6th January 1978 — Bus scheme is lailurel—TRRL
Close
Noticed an error?
If you've noticed an error in this article please click here to report it so we can fix it.
Keywords : Roads In England, Types Of Roads, Dual Carriageway, Motorway, A6 Road, A3 Road, N7 Road, Hospitality / Recreation

FAILURE was the conclusion of an overall assessment of Nottingham's "zone and collar" bus priority system carried out by the Transport and Road Research Laboratory.

The "zone and collar" experiment involved morning peak commuter traffic leaving suburban, residential zones being confined to certain exit. roads, where traffic signals controlled the rate at which traffic could join the main road network. On main ring roads traffic travelling towards the city was delayed at traffic signals, which formed a partial "collar" around the city centre. Buses were able to avoid delays at zone exits by using bus-only roads or bus-lanes to meet the main roads.

Bus journey times were reduced by less than one minute on average during rush hours, and bus punctuality was not improved.

Although priorities helped buses avoid the "artificial" experimental hold-ups, they became subject to delays elsewhere on their routes.

No significant swing back to buses from cars was caused by the experiment.

The experiment cost about £280,000 to operate for a year, and it is estimated that the cost of time losses caused to commercial and private traffic was in the region of £50,000.

The TRRL report states that, while the Nottingham scheme was discontinued after the assessment period, much of value about the relevance of such schemes was learned that may be of use in possible future schemes elsewhere.

THE Department of Transport has accepted the E209,055 tender of Gleeson Civil Engineering for the construction of a new carriageway for 2.4km (1.5 miles) of the A3 trunk road from Horndean to Clanfield Crossroads, Hampshire. Work should start on Monday and take about 10 months to complete.

With further planned improvements between Bar Hill and Godmanchester, this work will complete a high standard route from London to the Al via the MI.1 and the Huntingdon and Godmanchester by-pass. It will also improve the route from the East Coast ports to the north.

The Schemes and Order which are needed to apply motorway status to part of the M25 London Orbital Route between Dartford and Swanley, Kent, have been published by the Department of Transport.

This 5.3km (3.3 miles) length of road, is at present an all-purpose trunk road although its use is restricted by Road Traffic Regulation Orders to the classes of traffic permitted to use a motorway. It was built as a highstandard trunk road in pursuance of an order made in 1965 under Section 7 of the Highways Act 1959 and motorway regulations cannot be fully applied until the Schemes and Order now published are brought into operation.

Appropriation of the road as a motorway does not require any new construction work, and only minimal alterations to the road signs will be necessary.

Objections and representations may be made to the Secretary of State through the South Eastern Road Construction Unit, until January 20. Federated House, London Road, Dorking, Surrey.

John Horam, Parliamentary Under-Secretary of State for Transport, has announced the choice of route for a by-pass of Attleborough, Norfolk.

The preferred route generally follows the "Red" route which was put forward by the Department during the public consultation.