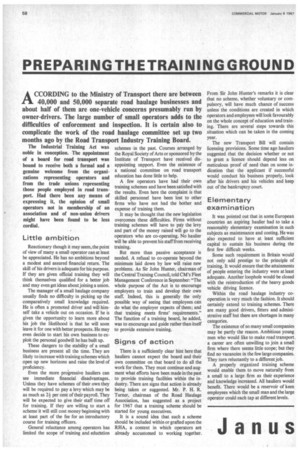 A CCORDING to the Ministry of Transport there are between 40,000 and 50,000 separate road haulage businesses and about half of them are one-vehicle concerns presumably run by owner-drivers. The large number of small operators adds to the difficulties of enforcement and inspection. It is certain also to complicate the work of the road haulage committee set up two months ago by the Road Transport Industry Training Board.

The Industrial Training Act was noble in conception. The appointment of a board for road transport was bound to receive both a formal and a genuine welcome from the organizations representing operators and from the trade unions representing those people employed in road transport. Had there been any means of expressing it, the opinion of small operators not in membership of an association and of non-union drivers might have been found to be less cordial.

Reactionary though it may seem, the point of view of many a small operator can at least be appreciated. He has no ambitions beyond a modest and assured financial return. The skill of his drivers is adequate for his purpose. If they are given official training they will think themselves qualified for a better job and may even get ideas about joining a union.

The manager of a small haulage company usually finds no difficulty in picking up the comparatively small knowledge required. He is often a promoted driver and will himself take a vehicle out on occasion. If he is given the opportunity to learn more about his job the likelihood is that he will soon leave it for one with better prospects. He may even decide to start his own business to exploit the personal goodwill he has built up.

These dangers to the stability of a small business are present all the time. They are likely to increase with training schemes which open up new horizons and raise the level of proficiency.

Even the more progressive hauliers can see immediate financial disadvantages. Unless they have schemes of their own they will be required to pay a levy which may be as much as 24 per cent of their payroll. They will be expected to give their staff time off for training. If they are willing to start a scheme it will still cost money beginning with at least part of the fee for an introductory course for training officers.

General reluctance among operators has limited the scope of training and education schemes in the past. Courses arranged by the Royal Society of Arts or sponsored by the Institute of Transport have received disappointing support. Even the existence of a national committee on road transport education has done little to help.

A few operators have had their own training schemes and have been satisfied with the results. Even here the complaint is that skilled personnel have been lost to other firms who have not had the bother and expense of training them.

It may be thought that the new legislation overcomes these difficulties. Firms without training schemes will have to pay the levy and part of the money raised will go to the operators who are co-operating. No haulier will be able to prevent his staff from receiving training.

But more than passive acceptance is needed. A refusal to co-operate beyond the minimum laid down by law will raise new problems. As Sir John Hunter, chairman of the Central Training Council, told CM's Fleet Management Conference in September: "The whole purpose of the Act is to encourage employers to train and develop their own staff. Indeed, this is generally the only possible way of seeing that employees can do what the employer expects of them; and that training meets firms' requirements." The function of a training board, he added, was to encourage and guide rather than itself to provide extensive training.

There is a sufficiently clear hint here that hauliers cannot expect the board and their own committee on that board to do all the work for them. They must continue and augment what efforts have been made in the past to provide training facilities within the industry. There are signs that action is already being taken or suggested. Mr. P. H. R. Turner, chairman of the Road Haulage Association, has suggested as a project for 1967 that a training scheme should be started for young executives.

It is a sound idea that such a scheme should be included within or grafted upon the RHA, a context in which operators are already accustomed to working together.

From Sir John Hunter's remarks it is clear that no scheme, whether voluntary or compulsory, will have much chance of success unless the conditions are created in which operators and employees will look favourably on the whole concept of education and training. There are several steps towards this situation which can be taken in the coming year.

The new Transport Bill will contain licensing provisions. Some time ago hauliers suggested that the decision whether or not to grant a licence should depend less on meticulous proof of need than on some indication that the applicant if successful would conduct his business properly, look after his drivers and his vehicles and keep out of the bankruptcy court.

It was pointed out that in some European countries an aspiring haulier had to take a reasonably elementary examination in such subjects as maintenance and costing. He was also expected to have at least sufficient capital to sustain his business during the first few difficult weeks.

Some such requirement in Britain would not only add prestige to the principle of training. It would ensure that the attainments of people entering the industry were at least adequate. Another loophole would be closed with the reintroduction of the heavy goods vehicle driving licence.

Within the road haulage industry cooperation is very much the fashion. It should certainly extend to training schemes. There are many good drivers, fitters and administrative staff but there are shortages in many categories.

The existence of so many small companies may be partly the reason. Ambitious young men who would like to make road transport. a career are often unwilling to join a small firm where there seems little scope; but they find no vacancies in the few large companies. They turn reluctantly to a different job.

A properly organized training scheme would enable them to move naturally from a small to a large firm as their experience and knowledge increased. All hauliers would benefit. There would be a reservoir of keen employees which the small man and the large operator could each tap at different levels.