Comparisons need not be odious 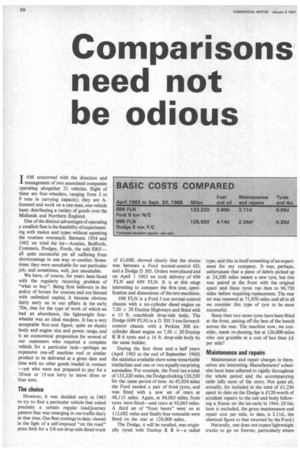 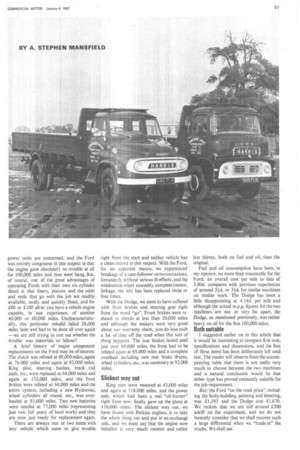 Page 52, 6th January 1967 — Comparisons need not be odious
Close
Noticed an error?
If you've noticed an error in this article please click here to report it so we can fix it.

T AM concerned with the direction and 1 management of two associated companies operating altogether 21 . vehicles. Eight of these are four-wheelers, ranging from 2 to 9 tons in carrying capacity; they are Alicensed and work on a one-man, one-vehicle basis distributing a variety of goods over the Midlands and Northern England.

One of the distinct advantages of operating a smallish fleet is the feasibility of experimenting with makes and types without upsetting the routines overmuch. Between 1954 and 1962 we tried the lot—Austins, Bedfords, Conuners, Dodges, Fords, the odd ERFall quite successful yet all suffering from shortcomings in one way or another. Sometimes they were unsuitable for our particular job, and sometimes, well, just unsuitable.

We have, of course, for years been faced with the regularly recurring problem of "what to buy". Being firm believers in the policy of horses for courses and not blessed with unlimited capital, it became obvious fairly early on in our affairs in the early '50s, that for the type of work of which we had an abundance, the lightweight fourwheeler was an ideal machine. It has a very acceptable first-cost figure, quite an elastic body and engine size and power range, and is an economical proposition for several of our customers who required a complete vehicle for a particular task—perhaps an expensive one-off machine tool or similar product to be delivered at a given date and time with no other goods loaded in contact —yet who were not prepared to pay for a 10-ton or 15-ton lorry to move three or four tons.

However, it was decided early in 1963 to try to find a particular vehicle that suited precisely a certain regular load/journey pattern that was emerging in our traffic diary at that time. Our fleet costings to date, viewed in the light of a self-imposed "on the road" price limit for a 5/6 ton drop-side diesel truck of £1,600, showed clearly that the choice was between a Ford normal-control 6D, and a Dodge D 305. Orders were placed and on April 1 1963 we took delivery of 696 FLN and 699 FLN. It is at this stage interesting to compare the first cost, specification and dimensions of the two machines.

The Dodge, it will be recalled, was originally tyred with Dunlop R B 6—a radial

type, and this in itself something of an experiment for my company. It was, perhaps, unfortunate that a piece of debris picked up at 24,200 miles meant a new tyre, but this was paired at the front with the original spare and these tyres ran then to 96,750 miles before requiring replacement. The rear set was renewed at 71,950 miles and all in all we consider this type of tyre to be most successful.

Since then two more tyres have been fitted at the front, pairing off the best of the bunch across the rear. The machine now, we consider, needs re-shoeing, but at 126,000 miles who can grumble at a cost of less than -Id. per mile?

Maintenance and repair charges in themselves are interesting. Manufacturers' schedules have been adhered to rigidly throughout the whole period and the accompanying table tells most of the story. Not quite all, actually, for included in the total of £1,236 spent to date on the Dodge is £120-worth of accident repairs to the cab and body following a fracas on the ice early in 1964. (If this item is excluded, the gross maintenance and repair cost per mile, to date, is 2.11d., the identical figure to that returned by the Ford.) Naturally, one does not expect lightweight trucks to go on forever, particularly where power units are concerned, and the Ford was entirely congruous in this respect in that the engine gave absolutely no trouble at all for 100,000 miles and then went bang. But, of course, one of the great advantages of operating Fords with their own six-cylinder diesel is that liners, pistons and the odds and ends that go with the job are readily available, easily and quickly fitted, and for £80 or £100 all-in you have a rebuilt engine capable, in our experience, of another 40,000 or 60,000 miles. Uncharacteristically, this particular rebuild failed 28,000 miles later and had to be done all over again —we are still trying to sort out whether the trouble was materials or labour!

A brief history of major component replacements on the Ford may be of interest. The clutch was relined at 48,000 miles, again at 76,000 miles and again at 93,000 miles. King pins, steering bushes, track rod ends, etc., were replaced at 64,000 miles and again at 132,000 miles, and the front brakes were relined at 64,000 miles and the entire system, including a new Hydrovac, wheel cylinders all round, etc., was overhauled at 83,000 miles. Two new batteries were needed at 77,000 miles (representing just two full years of hard work) and they are now just ready for replacement again.

right from the start and neither vehicle has a clean record in this respect. With the Ford, for no apparent reason, we experienced breakage of a cam-follower on two occasions, fortunately without serious ill-effects, and the windscreen wiper assembly complete (motor, linkage, the lot) has been replaced three or four times.

With the Dodge, we seem to have suffered with front brakes and steering gear right from the word "go". Front brakes were reduced to shreds at less than 20,000 miles and although the makers were very good about our warranty claim, you do lose such a lot of time off the road when this sort of thing happens. The rear brakes lasted until just over 60,000 miles, the front had to be relined again at 69,000 miles and a complete overhaul including new rear brake drums, wheel cylinders, etc., was necessary at 92,000 miles.

King pins were renewed at 43,000 miles and again at 118,000 miles; and the power unit, which had been a real "oil-burner" right from new, finally gave up the ghost at 110,000 miles. The slickest way out, we have found with Perkins engines, is to take the whole thing out and put in an exchange unit, and we must say that the engine now installed is very much sweeter and rather

less thirsty, both on fuel and oil, than the original.

Fuel and oil consumption have been, in my opinion, no more than reasonable for the Ford; an overall cost per mile to date of 3.80d. compares with previous experiences of around 3+cl. or 31d. for similar machines on similar work. The Dodge has been a little disappointing at 4.14d. per mile and although the actual m.p.g. figures for the two machines are not so very far apart, the Dodge, as mentioned previously, was rather heavy on oil for the first 100,000 miles.

I suggested earlier on in this article that it would be interesting to compare first cost, specifications and dimensions, and the first of these items has been deliberately left until last. The reader will observe from the accompanying table that there is not really very much to choose between the two machines and a natural conclusion would be that either type has proved eminently suitable for the job-requirement.

But: the Ford "on the road price", including the body-building, painting and lettering, was £1,393 and the Dodge cost £1,670. We reckon that we are still around £300 adrift on the experiment, and we do not honestly consider that we shall recover such a large differential when we "trade-in" the trucks. We shall see.