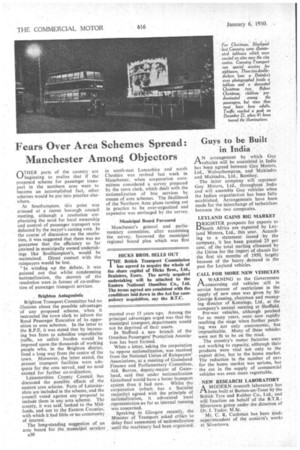 Page 32, 6th January 1950 — Fears Over Area Schemes Spread: Manchester Among Objectors
Close
Noticed an error?
If you've noticed an error in this article please click here to report it so we can fix it.
Keywords : Monopoly, Nationalization, Gateshead

OTHER parts of the country are beginning to realize that if the proposed scheme for passenger transport in the northern area were to become an accomplished fact, other schemes would be put into practice elsewhere.

At Southampton, this point was stressed at a recent borough council meeting, although a resolution emphasizing the need for local ownership and control of passenger transport was defeated by the mayor's casting vote. In the course of discussion on the resolution, it was suggested that there was no guarantee that the efficiency so far attained in municipally owned undertakings like Southampton's, would be maintained. Direct contact with the ratepayers would be lost.

In winding up the debate, it was pointed out that whilst condemning nationalization, the movers of the resolution were in favour of co-ordination of passenger transport services.

, Brighton Antagonistic Brighton Transport Committee had no illusions about the possible advantages of any proposed scheme, when it instructed the town clerk to inform the Road Passenger Executive of its opposition to area schemes. In the letter to the R.P.E. it was stated that by increasing bus fares to subsidize unprofitable traffic, an unfair . burden would be imposed upon the thousands of working people who, in the Brighton district. lived a long way from the centre of the town. ,Moreover, the letter stated, the present transport facilities were adequate for the area served, and no need existed for further co-ordination.

Leicestershire County Council has discussed the possible effects of the eastern area scheme. Parts of Leicestershire are included in the scheme, and the council voted against any -proposal to include them in any area scheme. The county, it was said, looked to the Midlands, and not to the Eastern Counties, with which it had little or no community of interest.

The long-standing suggestion of an area board for the municipal services A30 in south-east Lancashire and north Cheshire was revived last week in Manchester, when corporation committees considered a survey prepared by the town clerk, which dealt with the nationalization of bus services by means of area schemes. The likelihood of the Northern Area plans turning out in practice to be over-organized and expensive was envisaged by the survey.

Municipal Board Favoured Manchester's general and parliamentary committee, after examining the survey, favoured the municipal regional board plan which was first mooted over 15 years ago. Among the principal advantages urged was that the municipal transport departments would not be deprived of their assets.

In Stafford a new branch of the Omnibus Passengers' Protection Association has been formed.

Speaking in Glasgow recently, the Minister of Transport asked critics to delay final assessment of nationalization 'until the machinery had been organized.