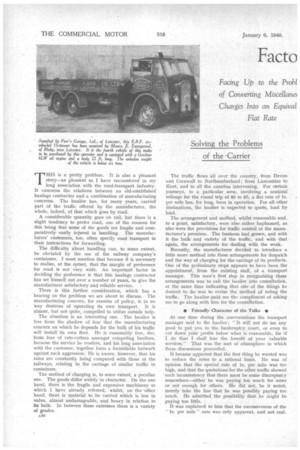 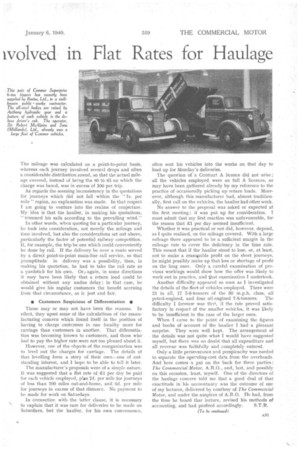 Page 40, 6th January 1940 — Facto 'volved in Flat Rates for Haulage
Close
Noticed an error?
If you've noticed an error in this article please click here to report it so we can fix it.

Facing up to the Probl of Converting Miseellana Charges Into an Equival, Flat Rate

THIS is a pretty problem. It is also a pleasant story—as pleasant as I have encountered in my long association with the road-transport industry. It concerns the relations between an old-established haulage contractor and a combination of manufacturing concerns. The haulier has, for many years, carried part of the traffic offered by the manufacturer, the whole, indeed, of that which goes by road.

A considerable quantity goes on rail, but there is a slight tendency to prefer road, one of the reasons for this being that some of the goods are fragile and comparatively easily injured in handling. The manufacturers' customers, too, often specify road transport in their instructions for forwarding_ The difficulty about handling can, to some extent, be obviated by the use of the railway company's containers. I must mention that because it is necessary to realize, at the outset, that the margin of preference for road is not very wide. An important factor in deciding the preference is that this haulage contractor has set himself out over a number of years, to give the manufacturer satisfactory and reliable service.

, There is this further consideration, which has a bearing on the problem we are about to discuss. The manufacturing concern, for reasons of policy, is in no Way desirous of operating its own transport. It is almost, but not quite, compelled to utilize outside help.

The situation is an interesting one. The haulier is free from the shadow of fear that the manufacturing concern on which he depends for the bulk of his tragic will install its own fleet. He is reasonably free, tho, from fear of rate-cutters amongst competing hauliers, because the service he renders, and his long association with the customer, together form a formidable bulwark against such aggression. He is aware, however, that his rates are constantly being compared with those of the railways, relating to the carriage of similar traffic in containers.

The method of charging is, to some extent, a peculiar one. The goods differ widely in character. On the one hand, there is the fragile and expensive machinery to which I have already referred, whilst, on the other hand, there is material to be carried which is low in value, almost undamageable, and heavy in relation to its bulk. In between these extremes there is a variety of grades.

A30 The traffic flows all over the country, from Devon and Cornwall to Northumberland; from Lancashire to Kent, and to all the counties intervening. For certain journeys, to a particular area, involving a nominal mileage for the round trip of 80 to 85, a flat rate of is. per mile has, for long, been in operation. For all other destinations, the haulier is expected to quote, load by load.

The arrangement and method, whilst reasonable and, to a point, satisfactory, were also rather haphazard, as also were the provisions for traffic control at the manufacturer's premises. The business had grown, and with it the bulk and variety of the traffic, and with that again, the arrangements for dealing with the work.

Recently, the manufacturer decided to introduce a little more method into these arrangements for despatch and the way of charging for the carriage of its products. One of the preliminary steps appears to have been the appointment, from the existing staff, of a transport manager. This man's first step in reorganizing these arrangements was to call the haulier into consultation, at the same time indicating that one of the things he desired to do was to revise the method of rating the traffic. The haulier paid me the compliment of asking me to go along with him for the consultation.

• Friendly Character of the Talks • At one time during the conversations the transport manager said to the haulier : "It will not do me any good to put you in the bankruptcy court, or even to cut down your profits below what is reasonable, for if .1 do that I shall lose the benefit of your valuable services." That was the sort of atmosphere in which these discussions proceeded.

It became apparent that the first thing he wanted was to reduce the rates to a rational basis. He was of opinion that the special rate of Is. per mile was too high, and that the quotations for the other traffic showed such inconsistency that there must be some discrepancy somewhere—either he was paying too much for some or not enough for others. He did not, be it noted, merely take the line that he was possibly paying too much. He admitted the possibility that he might be paying too little.

It was explained to him that the excessiveness of the " is. per mile" rate was only apparent, and not real.

The mileage was calculated on a point-to-point basis, 'whereas each journey involved several drops and often a considerable distribution round, so that the actual mileage covered, instead of being the SO tO 85 on which the charge was based, was in excess of 100 per trip.

As regards the seeming inconsistency in the quotations for journeys which did not fall within the " 1s. per mile" region, no explanation was made. In that respect I am going to venture into the realms of conjecture. My idea is that the haulier, in making his quotations, " trimmed his sails according to the prevailing wind."

In other words, when quoting for a particular journey, Tie took into consideration, not merely the mileage and time involved, but also the considerations set out above, particularly the factor of potential railway competition. If, for example,. the trip be one which could conveniently be done by rail. If the delivery be over a route served by a direct point-to-point main-line rail service, so that promptitude in delivery was a possibility, then, in making his quotation, he had to take the rail rate as a yardstick for his own. Or,,again, in some directions it may have been likely that a return load could be obtained without any undue delay ; in that case, he would give his regular customers the benefit accruing from that circumstance, as is just and fair, • Customers Suspicious of Differentiation Those may or may not have been the reasons. In effect, they upset some of the calculations of the manufacturing concern which found itself in the position of having to charge customers in one locality more for carriage than customers in another. That differentiation was becoming known to customers, and those who had to pay the higher rate were not too pleased about it.

However, one of the objects of the reorganization was to level out the charges for carriage. The details of that levelling form a story of their own—one of outstanding interest, and I hope to be able to tell it later.

The manufacturer's proposals were of a simple nature.

In connection with the tatter clause, it is necessary to explain that it was rare for deliveries to be made on Saturdays, but the haulier, for his own convenience, often sent his vehicles into the works on that day to load up for Monday's deliveries.

The question of a Contract A licence did not arise ; all the vehicles employed were on full A licences, as may have been gathered already by my reference -to the practice of occasionally picking up return loads. Moreover, although this manufacturer had, almost traditionally, first call on the vehicles, the haulier had other Work.

No answer to the proposal was asked or expected at the first meeting ; it was put up for consideration. I must admit that my first reaction was unfavourable, for the reason that £1 per day seemed insufficient.

Whether it was practical or not did, however, depend, as I quite realized, on the mileage covered. With a large mileage there appeared to be a sufficient margin in the mileage rate to cover the deficiency in the time rate. This meant that if the haulier stood to lose, or, at least, not to make a reasopable profit on the short journeys, • he might possibly make up that loss or shortage of profit on the long ones. Only a careful examination of previous workings would show how the offer was likely to work out in practice, and that examination I undertook.

Another difficulty appeared so soon as I investigated the details of the fleet of vehicles employed. There were 21 in all, 1 5-6-tanners of the 30 m.p.h. class, all petrol-engined, and four oil-engined 7-8,tonners. The difficulty I foresaw was that, if the rate proved satisfactory in respect of the smaller vehicles, it was likely to be insufficient in the case of the larger ones.

When I came to the point of examining the figures and books of account of the haulier I had a pleasant surprise. They sere well kept. The arrangement of the details was not quite what I would have suggested myself, but there was no doubt that all expenditure and all revenue was faithfully and completely entered.

Only a little perseverance and perspicacity was needed to separate the operating-cost data from the overheads. And here comes• a pat on the back for three parties : The Commercial Motor, A.R.O., and, last, and possibly on this occasion, least, myself. One of the directrirs of the haulage concern told me that a good deal of that exactitude in his accountancy was the outcome of one of my lectures, delivered by courtesy of The Commercial Motor, and under the auspices of A.R.O. He had, from the time he heard that lecture, revised his methods of

accounting, and had profited accordingly. S.T.R.