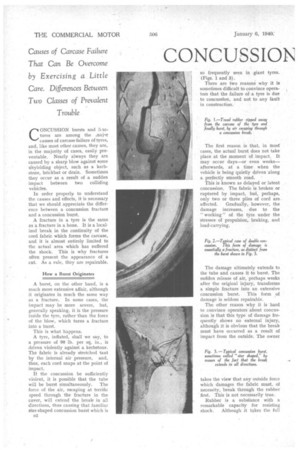 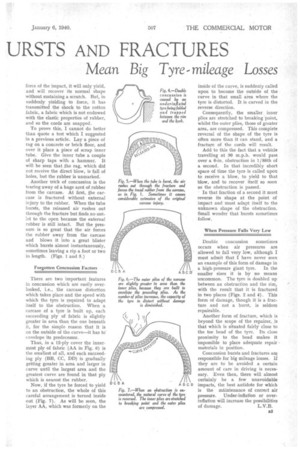 Page 28, 6th January 1940 — CONCUSSION
Close
Noticed an error?
If you've noticed an error in this article please click here to report it so we can fix it.

URSTS AND FRACTURES Mean Big Tyre-mileage Losses CONCUSSION bursts and ftsctures are among the ..nalor causes of carcase failure of tyres, and, like most other causes, they are, in the majority of cases, easily preventable. Nearly always they are caused by a sharp blow against some unyielding object, such as a kerbstone, brickbat or drain. Sometimes they occur as a result of a sudden impact between two colliding vehicles.

In order properly to understand the causes and effects, it is necessary that we should appreciate the difference between a concussion fracture and a concussion burst.

A fracture in a tyre is the same as a fracture in a bone. It is a localized break in the continuity of the cord fabric which forms the carcase, and it is almost entirely limited to the actual area which has suffered the shock. This is why fractures often present the appearance of a cut. As a rule, they are repairable.

How a Burst Originates A burst, on the other hand, is a much more extensive affair, although it originates in much the same way as a fracture. In some cases, the impact may be more severe, but, generally speaking, it is the pressure inside the tyre, rather than the force of the blow, which turns a fracture into a burst.

This is what happens.

A tyre, inflated, shall we say, to a pressure of 90 lb. per sq. in., is driven violently against a kerbstone. The fabric is already stretched taut by the internal air pressure, and, thus, each cord snaps at the point of impact.

If the concussion be sufficiently violent, it is possible that the tube will be burst simultaneously. The force of the air, escaping at terrific speed through the fracture in the cover, will extend the break in all directions, thus causing that familiar star-shaped concussion burst which is

There are two reasons why it is sometimes difficult to convince operators that the failure of a tyre is due to concussion, and not to any fault in construction.

The first reason is that, in tnosf cases, the actual burst does not take place at the moment of impact. It may occur days—or even weeks— afterwards, at a time when the vehicle is being quietly driven along a perfectly smooth road. • This is known as delayed or latent concussion. The fabric is broken or ruptured by impact, but, perhaps, only two or three plies of cord are affected. Gradually, however, the damage increases, due to the " working" of the tyre under the stresses of propulsion, braking, and load-carrying.

The damage ultimately extends to the tube and causes it to burst. The sudden release of air, perhaps weeks after the original injury, transforms a simple fracture into an extensive concussion burst. This form of damage is seldom repairable.

The other reason why it is hard to convince operators about concussion is that this type of damage frequently shows no external injury,

although it is obvious that the break must have occurred as a result of impact from the outside. The owner

takes the view that any outside force which damages the fabric must, of necessity, break through the rubber first. This is not necessarily true.

Rubber is a substance with a remarkable capacity for resisting shock. Although it takes the full force of the impact, it will only yield, and will recover its normal shape without sustaining a scratch. But, in suddenly yielding to force, it has transmitted the shock to the cotton fabric, a fabric which is not endowed with the elastic properties of rubber, and so the cords are snapped.

To prove this, I cannot do better than quote a test which I suggested in a previous article. Lay a piece of rag on a concrete or brick floor, and over it place a piece of scrap inner tube. Give the inner tube a couple of sharp taps with a hammer. It will be seen that the rag, which did not receive the direct -blow, is till of holes, but the rubber is unmarked.

Another trick of concussion is the tearing away of a huge area of rubber from the carcase. At first, the carcase is fractured without external injury to the rubber. When the tube bursts, the released air rushes out through the fracture but finds no outlet to the open because the external rubber is still intact. But the pressure is so great that the air forces the rubber away from the carcase and blows it into a great blister which bursts almost instantaneously, sometimes leaving a rip a foot or two in length. (Figs. I and 5.) There are two important features in concussion which are easily overlooked, i.e., the carcase distortion which takes place and the speed with which the tyre is required to adapt itself to the obstruction, When a carcase of a tyre is built up, each succeeding ply of fabric is slightly greater in area than the one beneath it, for the simple reason that it is on the outside of the curve—it has to envelope its predecessor.

Thus, in a 12-ply cover the innermost ply of fabric (AA in Fig. 6) is the smallest of all, and each succeeding ply (BB, CC, DD) is gradually getting greater in area and larger in curve until the largest area and the greatest curve are found in that ply which is nearest the rubber.

Now, if the tyre be forced to yield to an obstruction, the whole of this careful arrangement is turned inside out (Fig. 7). As will be seen, the layer AA, which was formerly on the inside of the curve, is suddenly called upon to become the outside of the curve in that small area where the tyre is distorted. It is curved in the reverse direction.

Consequently, the smaller inner plies are stretched to breaking 'point, whilst the outer plies, those of greater area, are compressed. This complete reversal of the shape of the tyre is often more than it can stand, and a fracture of the cords will result.

Add to this the fact that a vehicle travelling at SO m.p.h. would pass over a 6-in, obstruction in 1/88th of a second. In that incredibly short space of time the tyre is called upon to receive a blow, to yield to that blow, and to recover itself so soon as the obstruction is passed.

In that fraction of a second it must reverse its shape at the point of impact and must adapt itself to the unknown shape of the obstruction. Small wonder that bursts sometimes follow.

Double concussion sometimes occurs when air pressures are allowed to fall very low, although I must admit that I have never seen an example of this form of damage in a high-pressure giant tyre. In the smaller sizes it is by no means uncommon. The tyre is doubled up between an obstruction and the rim, with the result that it is fractured in two places (Figs. 2 and 4). This form of damage, though it is a fracture and not a burst, is seldom repairable.

Another form of fracture, which is beyond the scope of the repairer, is that which is situated fairly close to the toe bead of the tyre. Its close proximity to the bead makes it impossible to place adequate repair materials in position.

Concussion bursts and fractures ace responsible for big mileage losses. If they are to be avoided a certain amount of care in driving is necessary_ Even then, there will almost certainly be a few unavoidable impacts, the best antidote for which is the maintenance of correct air pressure. Under-inflation or overinflation will increase the possibilities of damage.