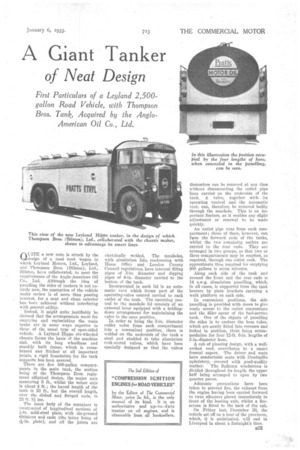 Page 37, 6th January 1933 — A Giant Tanker
Close
Noticed an error?
If you've noticed an error in this article please click here to report it so we can fix it.

QUITE a new note is struck by the design of a road tank wagon in which Leyland Motors, Ltd., Leyland, and Thompson Bros. (Bilston), Ltd., Bilston, have collaborated, to meet the requirements of the Anglo-American Oil Co., Ltd. Although the idea of panelling the sides of tankers is not entirely new, the conception of the vehicle under review is of more than passing interest, for a neat and clean exterior has been achieved without interfering with general utility.

Indeed, it might (mite Justifiably be claimed that the arrangements made for emptying and replenishing the main tanks are in some ways superior to those of the usual type of open-sided vehicle. A Leyland Hippo six-wheeled chassis forms the basis of the machine and, with its long wheelbase and sturdily built frame, which is crossbraced and flitched at all important points, a rigid foundation for the tank supports has been assured.

There are five 500-gallon compartments in the main tank, the section being of the Thompson Bros. registered elliptical design, the major axis measuring 6 ft., whilst the minor axis is about 4 ft.; the barrel length of the tank is 23 ft., but the overall length, over the dished and flanged ends, is 23 ft. Si ins.

The main body of the container is constructed of longitudinal sections of i-in. mild-steel plate, with die-pressed divisions and ends (the latter being of plate), and all the joints are electrically welded. The manholes, with aluminium lids, conforming with Home Office and London County Council regulations, have internal filling pipes of 3-in, diameter and dipping pipes of 4-in, diameter carried to the bottom of the tank.

Incorporated in each lid is an automatic vent which forms part of the operating-valve control carried to each outlet of the tank. The operating control to the manhole lid consists of an external lever equipped with a holdingdown arrangement for maintaining the valve in the open position.

In order to bring the 3-in, diameter outlet valve from each compartment into a convenient position, there is welded on the underside of the tank a steel pad studded to take aluminium cork-seated valves, which have been specially designed so that the valves themselves can be removed at any time without disconnecting the outlet pipe lines carried on the underside of the tank. A valve, together with its operating control and the automatic vent, can, therefore, be removed bodily through the manhole. This is an important feature, as it enables any slight adjustment or renewal to be made quickly.

An outlet pipe runs from each compartment; three of them, however, run faom the forward ends of the tanks, whilst the two remaining outlets are carried to the rear ends. They are arranged in two groups, so that two or three compartments may he emptied, as required, through one outlet cock. The approximate time required for emptying 500 gallons is seven minutes.

Along each side of the tank and around the front and the rear ends is 14 s.w.g. aluminium panelling, which, in all cases, is supported from the tank bearers by plate brackets carrying a walk platform on each side.

In convenient positions, the side panelling is provided with doors to give ready access to the outlet connections and the filler spout of the fuel-service tank. One of the objects of panelling the sides is to enclose the hose tubes, which are neatly fitted into recesses and locked in position, there being accommodation for four 12-ft. 6-in, lengths of 3-in.-diameter hose.

A cab of pleasing design, with a well. arched roof, contributes to a smart frontal aspect. The driver and mate have comfortable seats with Dunlopillo upholstery, covered with good-quality leather. The Splintex windscreen is divided throughout its length, the upper half being arranged to open. by two quarter panes.

Adequate precautions have been taken to prevent fire, the exhaust from the engine having been carried forward to twin silencers placed immediately in front of the leading axle, whilst a firescreen is fitted to the back of the cab.

On Friday last, December 30, the vehicle set off on a tour of the provinces, which, it is anticipated, will end in Liverpool in about a fortnight's time.