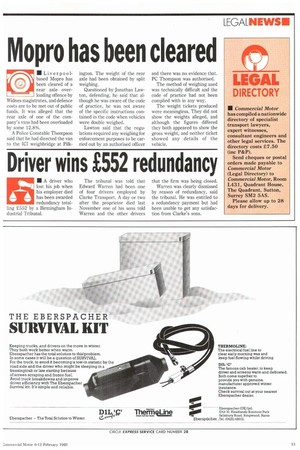 • A driver who lost his job when his employer died has been awarded redundancy totalling £552 by a Birmingham Industrial Tribunal.

The tribunal was told that Edward Warren had been one of four drivers employed by Clarke Transport. A day or two after the proprietor died last November one of his sons told Warren and the other drivers that the firm was being closed.

Warren was clearly dismissed by reason of redundancy, said the tribunal. He was entitled to a redundancy payment but had been unable to get any satisfaction from Clarke's sons.