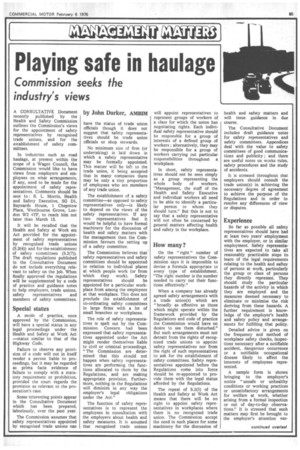 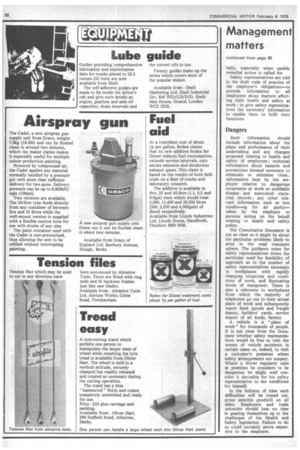 by John Darker, AMBIM A CONSULTATIVE Document recently published by the Health and Safety Commission outlines the Commission's views for the appointment of safety representatives by recognised trade unions, and for the establishment of safety cammittees.

In industries such as road haulage, at present within the scope of a Wages Council, the Commission would like to have views from employers and employees on what arrangements, if any, need to be made for the appointment of safety representatives. Comments should be sent to : R. L. Morris, Health and Safety Executive, SG DI, Baynards House, I Chepstow Place, Westbourne Grove, London W2 4TF, to reach him not later than March 13.

It will be recalled that the Health and Safety at Work etc Act provided for the appointment of safety representatives by recognised trade unions (S.2(4)) and for the establishment of safety committees (S.2(7)). The draft regulations published in the Consultative Document do not include everything relevant to safety on the job. When finally approved the regulations will be supplemented by a code of practice and guidance notes to help employers, trade unions, safety representatives and members of safety committees.

A mode of practice, once approved by the Commission, will have a special status in any legal proceedings under the Health and Safety at Work Act —status similar to that of the Highway Code.

Failure to observe any provision of a code will not in itself render a person liable to proceedings, but it may be regarded as prima facie evidence of failure to comply with a statutory requirement or prohibition, provided the court regards the provision as relevant to the prosecution's case.

Some interesting points appear in the Consultative Document which has been prepared, laboriously, over the past year.

No minimum size of firm (or undertaking) is laid down in which a safety representative may be formally appointed. This matter will •be left to the trade union, it being accepted that in many companies there may be only a tiny proportion of employees who are members of any trade union.

The Commission believes that safety representatives and safety committees should be appointed in relation to individual places at which people work (or from which they work), Safety representatives should be appointed for a particular workplace from among the employees at that workplace. This does not preclude the establishment of co-ordinating safety committees in large firms with a lot of small branches or workplaces.

In short, safety representatives should not be seen simply as a group representing the whole body of workers. "Management, the staff of the Health and Safety Executive and individual workers all need to be able to identify a particular person to whom they should turn." But this is not to say that a safety representative will not often be concerned by general matters affecting health and safety in the workplace.

On the " right " number of safety representatives the Commission says it is impossible to devise a formula appropriate to every •type of establishment, "The right number is the number needed to carry out their functions effectively."

When a company has already agreed safety arrangements with a trade union(s) which are "broadly as effective as those which might operate within the framework provided by the Regulations and code of practice the Commission would have no desire to see them disturbed." But such arrangements must not detratt from the rights of recognised trade unions to appoint safety representatives nor from the right of such representatives to ask for the establishment of safety committees. Safety representatives appointed before the Regulations come into force should be re-appointed to provide them with the legal status afforded by the Regulations.

The repeal of S.2(5) of the Health and Safety at Work Act means that there will be no right to appoint safety representatives in workplaces where there is no recognised trade union. The Commission accept the need in such places for some machinery for the discussion of health and safety matters and will issue guidance in due course.

The Consultative Document includes draft guidance notes for safety representatives and safety committees. Appendices deal with the value to safety committees of good communications and publicity ; and there are useful notes on works rules, safety procedures and the study of accidents.

It is stressed throughout that employers should consult the trade union(s) in achieving the necessary degree of agreement to achieve the purpose of the Regulations and in order to resolve any differences of view or disputes.

So far as possible all safety representatives should have had at least two years' employment with the employer, or in similar employment. Safety representatives are expected to take all reasonably practicable steps to learn of the legal requirements relating to the health and saftey of persons at work, particularly the group or class of persons they directly represent. They should study the particular hazards of the activity in which they are employed and the measures deemed necessary to eliminate or minimise the risk deriving from these hazards. A further requirement is knowledge of the employer's health and safety policy and arrangements for fulfilling that policy.

Detailed advice is given on the frequency and method of workplace safety checks, inspections necessary after a notifiable accident, dangerous occurrence or a notifiable occupational disease likely to affect the interests of employees represented.

A sample form is shown bringing to the employer's notice "unsafe or unhealthy conditions or working practices or unsatisfactory arrangements for welfare at work, whether arising from a formal inspection or out of day-to-day observations." It is stressed that such matters may first be brought to the employer's attention ver

bally, especially when speedy remedial action is called for.

Such information should include information about the plans and performance of their undertaking and any changes proposed relating to health and safety of employees ; technical information about hazards and precautions deemed necessary to eliminate or minimise them ; information kept by the employer relative to dangerous occurrence at work or notifiable disease and associated statistical records ; any other relevant information such as test results—eg for air purity— taken by the employer or persons acting on his behalf relating to health and safety policy, The Consultative Document is not as clear as it might be about the particular problems likely to arise in the road transport sphere. The guidance notes for safety representatives stress the particular need for flexibility of approach as to the number of safety representatives necessary in workplaces with rapidly changing situations and conditions of work, and fluctuating levels of manpower. There is also a reference to workplaces from which the majority of employees go out to their actual place of work and subsequently report back (goods and freight depots, builders' yards, service depots of all kinds, farms).

A vehicle is a "place of work" for thousands of people. It is not clear from the Document whether safety representatives would be free to visit the scenes of vehicle accidents in certain cases or, indeed, to visit a customer's premises where safety arrangements are suspect. Where a driver regularly calls at premises he considers to be dangerous he might well consider it desirable for his safety representative to see conditions for himself.

In the fullness of time such difficulties will be ironed out, given sensible goodwill on all sides. Employers and trade unionists should lose no time in gearing themselves up to the challenges of the Health and Safety legislation. Failure to do so could certainly prove expensive to the employer.