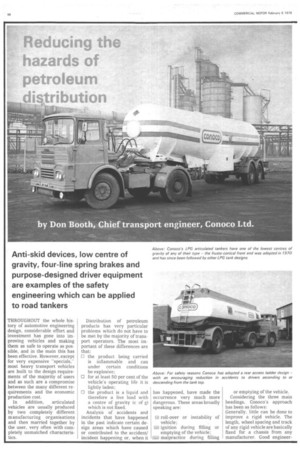 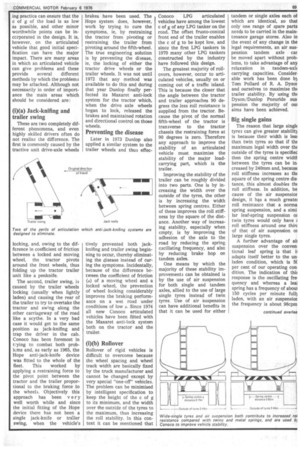 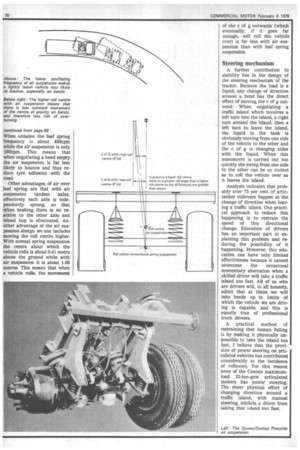 THROUGHOUT the whole history of automotive engineering design, considerable effort and investment has gone into improving vehicles and making them as safe to operate as possible, and in the main this has been effective. However, except for very expensive "specials," most heavy transport vehicles are built to the design requirements of the majority of users and as such are a compromise between the many different requirements and the economic production cost.

In addition, articulated vehicles are usually produced by two completely different manufacturing organisations and then married together by the user, very often with completely unmatched characteristics. Distribution of petroleum products has very particular problems which do not have to be met by the majority of transport operators. The most important of these differences are that: • the product being carried is inflammable and can under certain conditions be explosive ; O for at least 50 per cent of the vehicle's operating life it is lightly laden; O the product is a liquid and therefore a live load with a centre of gravity (c of g) which is not fixed.

Analysis of accidents and incidents that have happened in the past indicate certain design areas which have caused or contributed to the accident/ incident happening or, when it has happened, have made the occurrence very much more dangerous. These areas broadly speaking are: roll-over or instability of vehicle ; (ii ) ignition during filling or emptying of the vehicle; fill) malpractice during filling or emptying of the vehicle.

Considering the three main headings, Conoco's approach has been as follows: Generally, little can he done to improve a rigid vehicle. The length, wheel spacing and track of any rigid vehicle are basically fixed for a chassis from any manufacturer. Good engineer ing practice can ensure that the c of g of the load is as low as possible, and other minor worthwhile points can be incorporated in the design. It is, however, on the articulated vehicle that good initial specification can have the major impact. There are many areas in which an articulated vehicle can give problems and these provide several different methods by which the problem 3 may be attacked. Although not necessarily in order of importance the main areas which should be considered are:

These are two completely different phenomena, and even highly skilled drivers often do not realise the difference. The first is commonly caused by the tractive unit drive-axle wheels locking, and, owing to the difference in coefficient of friction between a locked and moving wheel, the tractor pivots around the front wheels, thus folding up the tractor trailer unit like a penknife.

The second, trailer swing, i3 caused by the trailer wheels locking (usually when lightly laden) and causing the rear of the trailer to try to overtake the tractor and swing along the other carriageway of the road like a scythe. In a very bad case it would get to the same position as jack-knifing and trap the driver in the cab. Conoco has been foremost in tying to combat both problems and, as early as 1965, the Hope anti-jack-knife device was fitted to the whole of the fleet. This worked by applying a restraining force to the pivot point between the tractor and the trailer proportional to the braking force to the wheels. Objectively this approach has been very well worth while and since the initial fitting of the Hope device there has not been a single jack-knife or trailer swing, when the vehicle's brakes have been used. The Hope system does, however, work by trying to cure the symptoms, ie, by restraining the tractor from pivoting or restraining the trailer from pivoting around the fifth-wheel. The true engineering solution is by preventing the disease, ie, the locking of either the tractor drive wheels or the trailer wheels. It was not until 1972 that any method was available to do this and during that year Dunlop finally perfected its Maxaret anti-lock system for the tractor which, when the drive axle wheels began to lock, released the brakes and maintained rotation and directional control on those wheels.

Later in 1973 Dunlop also applied a similar system to the trailer wheels and thus effec tively prevented both jackknifing and trailer swing beginning to occur, thereby eliminating the disease instead of curing the symptoms. Incidentally, because of the difference between the coefficient of friction (e) of a moving wheel and a locked wheel, the prevention of wheel locking considerably improves the braking performance on a wet road under conditions of low A. Since 1974 all new Conoco ,articulated vehicles have been fitted with the Maxaret iantielock system both on the tractor and the trailer.

Rollover of rigid vehicles is difficult to overcome because the wheel spacing and wheel track width are basically fixed by the truck manufacturer and cannot be changed except by very special "one-off" vehicles. The problem can be minimised by intelligent specification to keep the height of the c of g to its minimum, and the width over the outside of the tyres to the maximum, thus increasing the roll stability. In this context it can be mentioned •that Conoco LPG articulated vehicles have among the lowest c of g of any LPG tanker on the road. The offset frusto-conical front end of the trailer enables the c of g to be kept low, and since. the first LPG tankers in 1970 many other LPG tankers constructed by the industry have followed this design.

The greatest majority of rollovers, however, occur to articulated vehicles, usually on or coming out of a traffic island. This is because the closer that the angle between the tractor and trailer approaches 90 degrees the less roll resistance is supplied from the tractor. Because the pivot of the normal fifth-wheel of the tractor is transverse to the tractor chassis the restraining force at 90 degrees is zero. Therefore any approach to improve the stability of an articulated vehicle must maximise the stability of the major loadcarrying part, which is the trailer.

Improving the stability of the trailer can be roughly divided into two parts. One is by increasing the width over the outside of the tyres, the other is by increasing the width between spring centres. Either of these improves the roll stiffness by the square of the distance. Another way of increasing stability, especially when empty, is by improving the adhesion of the axle to the road by reducing the spring oscillating frequency, and also by reducing brake hop on tandem axles.

One means by which the majority of these stability improvements can be obtained is by the use of air suspension for both single and tandem axles, allied to the use of large single tyres instead of twin tyres. Use of air Suspension can have additional benefits in that it can be used for either tandem or single axles each of which are identical, so that only one range of spare parts needs to be carried in the maintenance garage stores. Also in the event of any change in the legal requirements, an air suspension tandem axle car be moved apart without problems, to take advantage of any relaxation in tanderavaxIE carrying capacities. Considerable work has been done by Tom Pollard of R. A. Dysor and ourselves to maximise thE trailer stability. By using thE Dyson/Dunlop Pneuride sus pension the majority of ow aims have been achieved.

The reason that large single tyres can give greater stability is because their width is les.s than twin tyres so that if the maximum legal width over thE outside of the tyres is specified then the spring centre widtt between the tyres can be in. creased by 240mm and, becausc roll stiffness increases as thE square of the spring centre dis. tance, this almost doubles thE roll stiffness. In addition, be cause of the air suspensior design, it has a much greatei roll resistance that a norma spring suspension, and a simi. lar leaf-spring suspension or twin tyres would only have roll stiffness around one thirc of that of air suspension or large single tyres.

A further contribution to stability lies in the design of the steering mechanism of the tractor. Because the load is a liquid, any change of direction around a bend has the direct effect of moving the c of g outward. When negotiating a traffic island which involves a left turn into the island, a right turn around the island, then a left turn to leave the island, the liquid in the tank is obviously moving from one side of the vehicle to the other and the c of g is changing sides with the liquid. When this manoeuvre is carried out too quickly the swing from one side to the other can be so violent as to roll the vehicle over as it leaves the island.

Analysis indicates that probably over 75 per cent a artictanker rollovers happen at the change of direction when leaving a traffic island. One practical approach to reduce this happening is to restrain the speed of this directional change. Education of drivers has an important part in explaining this problem and reducing the possibility of it happening. However, this education can have only limited effectiveness because it cannot overcome the occasional momentary aberration when a skilled driver will take a traffic island too fast. All of us who are drivers will, in all honesty, admit that at times we will take bends up to limits of which the vehicle we are driving is capable, and this is equally true of professional truck drivers.

A practical method of restraining that human failing is by making it physically impossible to take the island too fast. I believe that the provision of power steering on articulated vehicles has contributed considerably to the incidence of rollovers. For this reason none of the Conoco maximumload 32-ton-gcw articulated tankers has power steering. The sheer physical effort of changing direction around a traffic island, with manual steering, inhibits a driver from taking that island too fast.