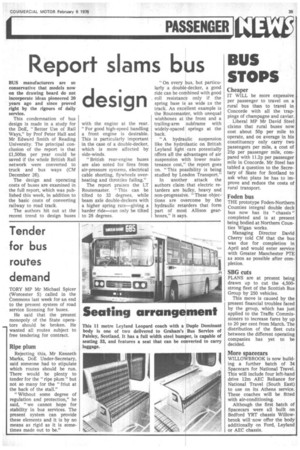 Page 41, 6th February 1976 — Tender for bus routes demand
Close
Noticed an error?
If you've noticed an error in this article please click here to report it so we can fix it.
Keywords : Transit Bus, Bus, Politics

TORY MP Mr Michael Spicer (Worcester S) called in the Commons last week for an end to the present system of road service licensing for buses.

He said that the present monopoly of the State operators should be broken. He wanted all routes subject to free tendering for contract.

Rejecting this, Mr Kenneth Marks, DoE Under-Secretary, said someone had to stipulate which routes should be run. There would be plenty to tender for the "ripe plum" but not so many for the " friut at the back of the stall."

"Without some degree of regulation and protection," he said, "we cannot hope for stability in bus services. The present system can provide these elements and it is by no means as rigid as it is sometimes made out to be."