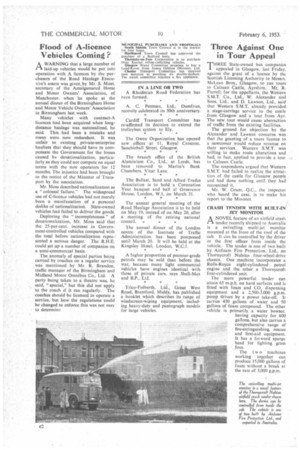 Page 40, 6th February 1953 — IN A LINE OR TWO
Close
Noticed an error?
If you've noticed an error in this article please click here to report it so we can fix it.

A Rhodesian Road Federation has• been formed.

Cardiff Transport Committee has re-affirmed its decision to extend the trolleybus system to Ely.

The branch office of the British Aluminium Co., Ltd., at Leeds, has been removed to Martin's Bank Chambers. Vicar Lane.

The Ballast, Sand and Allied -Trades Association is to hold a Coronation Year banquet and ball at Grosvenor House, London, W.1, on March 31.

The annual general meeting of the Road Haulage Association is to be held on May 19, instead of on May 20, after a meeting of the retiring national council. • • • The annual dinner of the London centre of the Institute of Traffic Administration has been postponed until March 20. It will be held at the • Kingsley Hotel, London, W.C.L A higher proportion of premier-grade patrols may be sold than before the war, because many light commercial vehicles have engines identical with those of private cars, says Shell-Mex and B.P., Ltd.

Trico-Folberth, Ltd., Great West Road. Brentford, Middx, has published a booklet which describes its range of windscreen-wiping equipment, including heavy-duty and pantograph models for large vehicles.